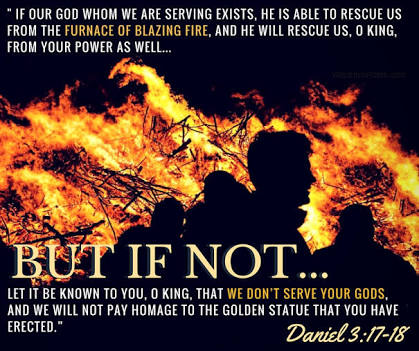 But even if he does not, we want you to know, Your Majesty, that we will not serve your gods or worship the image of gold you have set up.”-Dan 3:17-18

These were the reply of the three Hebrew young men to King Nebuchadnezzar.They insisted they were not going to bow down to the image of gold set up by the heathen King.The implication of their decision was simple:

“Whoever does not fall down and worship will immediately be thrown into a blazing furnace.”

The 3 Hebrew men’s response to this is a lesson to us as Christians who stand on a better covenant.

1)They strongly had an absolute faith in God!

2)They were not ready to compromise on the truth they knew about God even if God didn’t help them!

While some people today will even threaten God and say they will stop serving Him if He does not do what they ask of Him,these Hebrew men who had no access to the faith messages we have today were resolute in their belief.

God can deliver you!

Many are the afflictions of the righteous: but the LORD delivers him out of them all-Psalm 34:19

God has promised to deliver you and to help you.Do you believe Him? Do you have absolute faith in Him?

Today’s post is actually about the second response of the Hebrew men:

But even if he does not, we want you to know, Your Majesty, that we will not serve your gods or worship the image of gold you have set up.”

These Hebrew men said something that was more than having faith in God:’Even if God does not help us…’ Does it mean there are such situations?If you study the Bible very well,there are instances that God didnt help/ deliver His children. Yes! God in His sovereignty can decide to deliver or not to.

1)Abel was murdered in cold blood by Cain.

2)John the Baptist’s head was chopped off his body by Herod.

3)James was put to death with sword by King Herod.

4)Stephen was stoned to death!

5)Peter was crucified upside down.

6)Andrew was scourged, and then tied rather than nailed to a cross.

7)Bartholomew was skinned alive and then beheaded.

8)Thomas was martyred  by running him through with a spear.

9)Apostle Paul was beheaded by Nero.

10)James son of Alphaeus was beaten, stoned and then killed by hitting him in the head with a club.

One would think God should have intervened in these situations to save all these people,but He didn’t! Why? God is sovereign:”Therefore God has mercy on whom he wants to have mercy, and he hardens whom he wants to harden.”The Hebrew men understood the sovereignty of God and they had to give that allowance:”God can deliver us,we strongly believe, but if He does not,He is still God and we are His whether we live or die!”

What is the truth that you know about God?I know you are a Christian but do you know some basic truths about your Father in heaven?

“That is why I am suffering as I am. Yet this is no cause for shame, because I know whom I have believed, and am convinced that he is able to guard what I have entrusted to him until that day”.

Paul was so sure that God could keep whatever he handed over to Him.He was damn sure!He knew about God’s faithfulness and protection.

Is it His faithfulness? His love? His mercy? His sovereignty,His healing power,His deliverance etc

There are truths you must know about God that will make you stand your ground in the midst of pressures even if God does not show up to deliver you!

Paul knew the truth about God’s love.Read his conviction about it here:“For I am convinced that neither death nor life, neither angels nor demons,neither the present nor the future,nor any powers,  neither height nor depth, nor anything else in all creation, will be able to separate us from the love of God that is in Christ Jesus our Lord.”-Rom 8:38-39.

Whaoooo! Even if Godly angels should come and sweet talk him out of this love,he wouldn’t bulge!This is another level of maturity in Christ.

Stand firm in Christ.Like Paul and the Hebrew men.Be convinced about the truth you know.It should be noted that there are things to be lost when you stand for the truth.

You may lose big contract because you are not ready to compromise on your integrity.

You may not get a job because you are not going to sleep with that manager!

You may be sacked because you refuse to alter a document that would have saved your job.

You may be persecuted for saying the truth.

You are not alone sir/ma.All the examples of people that were persecuted above were people like you.Here are the lessons we can learn from them:

1)They stood firm in faith and truth.They had faith that God could do all things.But if God in His sovereignty decided not to do them,they would not compromise the truth they knew under any circumstances.Both faith and truth must go hand in hand.Abraham had faith in God but compromised the truth under pressure from his wife:”The LORD has kept me from having children. Go, sleep with my slave; perhaps I can build a family through her.” Abram agreed to what Sarai said.”-Gen 16:2.Abraham doubted the faithfulness of God he once believed in.He therefore opted for a second option.Compromise of faith usually gives birth to Ishmael that will be a thorn in the flesh.

2)They feared God than mortal men:”Do not be afraid of those who kill the body but cannot kill the soul. Rather, be afraid of the One who can destroy both soul and body in hell.”-Matt 10:28

Many times we compromise on our faith because we are afraid of human beings.We want to either please them or succumb to their threat . Stand firm henceforth! They are human beings like you.The worst they can do is to kill the body.Be afraid of God that can destroy both body and soul.Just be sure you are standing on the side of truth.

3)Their hope was not only on this earth:

“If in this life only we have hope in Christ, we are of all men most miserable”.1Cor 15:19

“If we have set our hopes on the Messiah in this life only, we deserve more pity than any other people.”

Many compromise today because they think their only place of reward is on this earth.All the men that were martyred above might have died prematurely but that was not their end.When Christ comes back,each of them will still have to be rewarded for their labour of love.

God “will repay each person according to what they have done.”-Rom2:6

“For the Son of Man is going to come in his Father’s glory with his angels, and then he will reward each person according to what they have done”-Matt16:27

“For we must all appear before the judgment seat of Christ, so that each of us may receive what is due us for the things done while in the body, whether good or bad.”-2Cor 5:10 .This is our consolation as believers.

We know that we are going to face persecution in this world:“These things I have spoken to you, that in me you may have peace. In the world you shall have distress: but have confidence, I have overcome the world.John 16:33(Douay-Rheims Bible)

We also know that we are to stand firm in Christ because Christ will reward us and not only that,He will also judge our persecutors.

“God is just: He will pay back trouble to those who trouble you and give relief to you who are troubled, and to us as well. This will happen when the Lord Jesus is revealed from heaven in blazing fire with his powerful angels.”-2Thess1:6-7

King Herod will receive his reward though he killed John the Baptist because John spoke the truth.He only killed his body.I hear people giving a lot of reasons why John died suddenly.Some even said he died because he sent his disciples to inquire Jesus was the Messiah. The Bible however doesn’t keep us in darkness about why he died:”For John had been saying to Herod, “It is not lawful for you to have your brother’s wife.”  So Herodias nursed a grudge against John and wanted to kill him. But she was not able to, because Herod feared John and protected him, knowing him to be a righteous and holy man…”Mark6:18-20. John was killed because he said the truth.Simple! Many have died because they stood for the truth.Many are  still going to be persecuted because they are doing good.Some God will deliver but some like John the Baptist will have to rest in the Lord waiting for their reward.

Brethren, don’t let us become so earthly minded that we forget that we are pilgrims/strangers here on earth at least for now:”For our citizenship is in heaven…”/“But the State of which we are citizens is in Heaven…Phil 3:20(TCNT)

It is not how long you spend on this earth that matters but what you stand for while you are on earth.Do you stand for truth or falsehood?

Don’t shy away from the truth because you are afraid of the consequences. Don’t allow compromise because men won’t give you what they promise. Let them keep their promises.But stand firm on the truth.Sometimes,your steadfastness can even make them submit to your God as in the case of Nebuchadnezzar.

Note that God in His sovereignty may decide not to give immediate deliverance to His children! Even in situations like that,we must have an absolute faith in God to save us and if  He decides not to save us now:#We Stand firm in Christ#We Stand for Holiness#We stand for righteousness #.