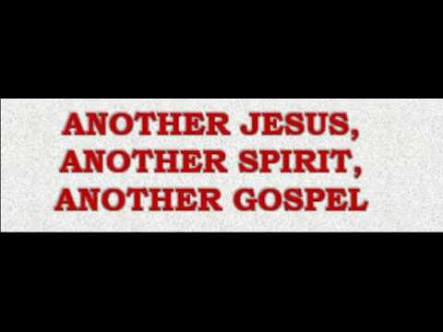 To fully understand this verse,you will have to imagine a couple that has pledged their love for each other and suddenly the husband sees his wife giving her attention to another man! In fact the woman listens attentively to this strange man as he promises to give her ‘better’ things than her husband if she agrees to his proposal…Apostle Paul was jealous somehow that his converts were being fleeced into accepting a fake teaching.

What astonished Paul was the readiness with which they accepted this fake teaching: “They happily put up with it”. Brethren,falsehood sells faster than truth because people easily associate with the peddlers. Preach sound doctrine,people run away.Add some falsehood to garnish the truth,they flock around you!

-Jesus is the Almighty God.He is not just one of the prophets.

-His birth was conceived by the Holy Spirit in the womb of Virgin Mary.

-He  put on human flesh to dwell among humans.

-It’s only through Him any man can be saved.He is the only way to Heaven.He is not one of the many ways.

-He is alive now and He is coming very soon to first take those that believe in Him to be with Him.

Today we still have many religious groups that teach ‘another’ Jesus than the one written in the Bible.I will specifically mention some sects,religious groups and ‘christian bodies’ that have been teaching/preaching another Jesus:

1)Jehovah witnesses:They believe Jesus was known as Michael before he came to earth and is known also by that name since his return to heaven.They teach another Jesus who is angel Michael.However Apostle Paul preached Jesus who is God.Are they not different?

2)Islam:Muslims believe in a Jesus who was a prophet and not God.They believe Jesus never died on the cross.

3)Seventh-Day Adventists:Teach that trusting Jesus as Savior is not enough in itself to be saved.

5)Some pentecostal churches:Now teach another Jesus that is not on the pages of the Bible.Jesus performed miracles but they do magic in their churches.They use technology(photoshop) to deceive unsuspecting people in the name of their fake Jesus!

THE TRUE SPIRIT VS ANOTHER SPIRIT

1)The true Spirit is ‘He’ not ‘It’.He is not a cosmic force.He is the third Person of the Trinity.He is not an angel!

2)He is a Spirit of truth not the Truth  “He is the soul of truth, the life inside the truth, the sap within the gospel doctrines, keeping them fresh and green.” ².

This is the life that many of the religious groups lack. You may know Jesus,but without His Spirit…you only have a form of godliness!

3)He guides into all/whole/full truth: Not just one aspect of the truth…ALL! Paul proclaimed the whole counsel of God- Act 20:27

You can’t believe in Jesus’ divinity and deny His humanity:“But every person who doesn’t declare that Jesus Christ has come as a human has a spirit that isn’t from God. This is the spirit of the antichrist that you have heard is coming. That spirit is already in the world.

4)He doesn’t speak on His own authority:”It indicates that the Spirit is not the originator, or primary source, of truth, but a “remembrancer” of the truth conveyed by the Lord to the apostles.”³

The Holy Spirit does not act independently of the Father and Son.In other words,He won’t tell you to do things that are contrary to God’s documented words.

ANY RHEMA THAT LEADS YOU CONTRARY TO GOD’S DOCUMENTED WORDS IS A HOAX! THE LOGOS WILL ALWAYS BE THE SPIRIT’S TEMPLATE!

“Dear friends, don’t believe all people who say that they have the Spirit. Instead, test them. See whether the spirit they have is from God, because there are many false prophets in the world.”-1John 4:1

1)Gospel of Hymenaeus:Hymenaeus was teaching that  the second coming of Christ had already occurred!

“Their teaching will spread like gangrene. Among them are Hymenaeus and Philetus, who have departed from the truth.They say that the resurrection has already taken place, and they destroy the faith of some.”-2 Tim 2:17-18

2)The Gospel of Barnabas(The gospel according to Islam) :It claims that Jesus predicted the advent of Muhammad- Sura 61:6.Many Muslim scholars believe that the Promised Holy Spirit(Paraclete in Greek) means Ahmad in Arabic! So Mohammed was believed to be the Holy Spirit! “The Gospel conforms to the Islamic interpretation of Christian origins and contradicts the New Testament teachings of Christianity.Rather than describing the crucifixion of Jesus, Gospel of Barnabas describes him being raised up into heaven.It calls Jesus a “prophet” whose mission was restricted to the “house of Israel”.⁴

3)The Gospel of “Once Saved, Always Saved”:It was formulated by  John Calvin (1509-1564).What baffles me is the fact that the present day proponents think this concept is a ‘new rhema’! Hahahaha.Lies from the pit of Hell.

4)The false teaching that salvation is by grace plus works :”For it is by grace you have been saved, through faith–and this is not from yourselves, it is the gift of God–Ephe 2:8

“But when the kindness and love of God our Savior appeared,he saved us, not because of righteous things we had done, but because of his mercy.-Titus 3:4-5

The Bible says salvation is by grace without works and that works follow after salvation.

5)The Gospel of fake peace/positivity: This is modernised but demonized gospel.These teachers avoid terms like: Hell,sin, sinners, transgression, iniquity,holiness, repentance etc.Rather they make you comfortable with your sins and evil way of life.So they pull crowds with their smooth mouths!

All I have to say here is this: Every heretical gospel has an element of truth in it…But we don’t preach or teach half-truths.We proclaim the whole counsel of God. Halleluyah.

Don’t be deceived because false teachers back up everything they say with God’s Words/Bible verses.Even the Devil quoted Bible verses in order to tempt Christ.Be guided by the Holy Spirit!

2)The Biblical Illustrator Commentary on John 16:13

3)Coffman’s Commentaries on the Bible about John 16:13

4)The Gospel of Barnabas.