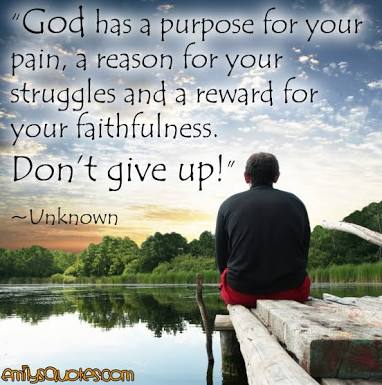 The purpose for which you were created by God is far more important than your pains! Though no one likes pain but it is part of life!People go through stuff either early ,middle or late in life.But one thing is certain,the purpose of God is far bigger than the pains you are going through.Never lose sight of that irrespective of the pains.

“When Elisha became sick with the illness of which he was to die…”-2Kings 13:14(NASB)

“Now Elisha had a terminal illness…”(NET)

Have you ever been or are you in a situation where you are experiencing the contradictions of life?

You were once very healthy but now you are sick in your body…In fact you are on the hospital bed now…Meanwhile,you used to care for the sick before now.

You used to sponsor the indigent ones but now you need help to eat once a day.

You used to teach your colleagues in the University but now nothing to show for it…No job!

You used to pray for people that were barren and God would answer them but you don’t have a child of your own!

Life is usually full of many contradictions and pains… Ups and downs,straights and bends,smooth and rough.

Elisha was not demoralized even on his sick bed.If you read the next few verses ,you will notice he put the King that came to seek his help through.He had no mixed feelings whatsoever.

But I have some questions for you: Why did God not heal Elisha from his sickness? If he had power to do all those miracles in 2Kings,why did he not use the same power to save himself from this terminal illness?

Let’s  assume I don’t know the answer…Fast forward to verse 20: “Elisha died and was buried…”

The illness killed him! Case closed? May be not!

Next line please: “Now Moabite raiders used to enter the country every spring. Once while some Israelites were burying a man, suddenly they saw a band of raiders; so they threw the man’s body into Elisha’s tomb. When the body touched Elisha’s bones, the man came to life and stood up on his feet.”

Whaooo…The same person who couldn’t save himself from his illness? His bones(not even flesh+blood+bone) touched a dead body and came to life? Wonderful… Wonderful…Splendid…

How on earth could this happen?

Let me trust God to help me teach this topic…Praise God somebody…Halleluyah!

Elisha asked Elijah the double portion of his power right? Ok! How many miracles did Elijah do? 16 miracles…OK! If you double the 16,how many should Elisha do? 32 right? OK! Let me inform you that by the time Elisha died,he had only done 31! The man that he resurrected made it number 32…Count the miracles he did in your Bible if you don’t believe.

Let me free Elisha’s story for a while.

What is the purpose for which you were created? What was the  purpose He had in mind? There is a general and specific purpose for every man on earth.But let me concentrate on the general one:

“Bring all who claim me as their God, for I have made them for my glory. It was I who created them.”-Isa 43:7.

God will never create someone without having a purpose in mind and that purpose is sacrosanct to Him. You are created for His glory! His main purpose  is to glorify Himself through his works in your life.That is far more important to God than the pains you are going through! Ha! This is hard sir! That may sound harsh but it is the truth!

Lets study that in the Bible…

Joseph went through pains and it was as if God neglected him but eventually God’s purpose prevailed…He became Prime Minister.

Cain murdered Abel in cold blood and it was as if that was his end until we read it in book of Hebrew that his blood still speaks…mimicking the blood of the lamb though inferior to it.

David went through pain to get to the throne.He became a fugitive despite God’s anointing on him.His pain was so severe that Jesus Christ had to use some of his lines in the Psalm when he was crucified.David’s pain lasted for a night…but the purpose of God prevailed in the morning.Today even Jesus is called son of David.

A man was born blind and there were many speculations that either him or his parents had sinned for him to be in that situation…He knew he had not sinned…He asked his parents they said there was nothing like that in their lineage.Why this contradiction?

Jesus provided an answer: “Neither this man nor his parents sinned,” said Jesus, “but this happened so that the works of God might be displayed in him”. It didn’t matter to Jesus the pains and rejections the man had been through…The main thing is that God had a purpose in mind when he created him .And when it was time,the purposed was fulfilled.

Mary,Martha and the family went through pains for good 4days.He delayed his coming for 4days before he came to raise up Lazarus.If you were Lazarus,after the resurrection,wouldnt you have asked Jesus why he didn’t come on time? Then Jesus must have told you: “My delay was purposeful”! Love could be tough sometimes especially when there is a good purpose for it!

What about Jesus Himself in the garden of Gethsemane, the pain was so much for Him that he wanted to sacrifice the purpose for which He came to the world.However,He submitted to God’s purpose: ” It is not my will but your will be done”.

What about Paul? He prayed 3 times concerning the thorn in his flesh…What did God say to him: “My grace is sufficient for thee”. Did God not care about his pain? Hummmm.He cared but God’s purpose is more important that all that! This God is sovereign!

Back to Elisha’s story.Though he went through a terminal illness and it was as if God did not care to heal him yet even at his death,that same God achieved the mandate placed on Elisha.He ended up doing 32 miracles.He fulfilled his ultimate purpose by operating in the double portion of Elijah.

For as many that are going through pains today,I want to encourage you never to give up.Fix your eyes on God despite the pains and contradictions.Look at the BIG picture! Look at the glory that will be ascribed to God when this night is over…

Though I cannot tell you if or when the pain will be over…One thing is sure: His purpose for your life shall be fulfilled.Calm down! His purpose is not evil:” For I know the thoughts that I think concerning you, said the LORD, thoughts of peace, and not of evil, to give you the end that you wait for.”-Jer 29:11

The waiting period and the pains may be long but please don’t lose focus.Though it may tarry…Wait for God’s  purpose to be fulfilled!

9 thoughts on “PURPOSE AND PAIN(P-SQUARED)”