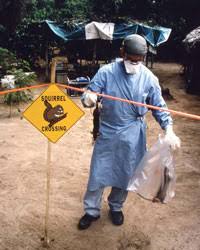 Have you heard about Monkey pox disease? If no, then you will want to read this post.If yes,maybe you can update your knowledge.

It is a disease that is caused by an infection with monkeypox virus.

That it is called ‘Monkey pox’ does not mean it is only contacted through monkeys! In fact it infects rodents more than primates! It was named ‘Monkey pox’ because the virus was first isolated in 1958 when two outbreaks of a pox-like disease occurred in colonies of monkeys kept for research.

Monkeypox is usually primarily transmitted to humans from:

Either through contact with the animal’s blood or through a bite.

b)Indirect contact with lesion material, such as through contaminated bedding.

The symptoms are almost the same as small pox except that while monkey pox will cause lymph nodes to enlarge,small pox does not.This is a picture of lymph node locations in the body:

The disease begins with:

Within 1 to 3 days (sometimes longer) after the appearance of fever, the patient develops a rash, often beginning on the face then spreading to other parts of the body.

Ensure use of protective equipment while taking care of ill persons.

Regular hand washing should be carried out after caring for or visiting sick people.

As at the time of writing this post (6:04am),10 people have been infected with Monkey pox disease and 49 people under surveillance in Bayelsa state!

The Federal Ministry of Health has advised Nigerians to desist from eating monkeys, bush meat and dead animals as doing so could make one susceptible to the Monkey Pox Disease.

The Minister of Health, Prof. Isaac Adewole, said this in a statement signed by the Director, Media and Public Relations at the ministry, Mrs. Boade Akinola, on Thursday.

Adewole said the disease neither had a cure nor a vaccine. He, however, said there was no cause for alarm as it was mild. The statement read in part, “He said that the virus was mild and there was no known treatment and no preventive vaccines hence the public should be at alert and avoid crowded places as much as possible “He advised the public to avoid eating dead animals, bush meat and particularly bush monkeys.”

May what we eat not harm us! Say Amen but be cautious…

Have a blessed day ahead.