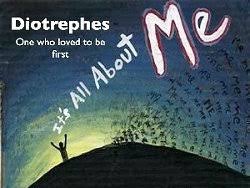 Apostle John wrote a letter detailing some concerns he had about the Church.Do you want to know those concerns?

I wrote a letter to the congregation.

But Diotrephes, who loves to be in charge,won’t accept us.

When I come, I will report some of the things he is doing,

And the evil accusations he is making against us.

Not only does he refuse to welcome the traveling teachers,

He also tells others not to help them.

Who was Diotrephes? He was a leader and a self-seeking troublemaker in an unnamed local church in the first century.

What were the issues Apostle John accused Diotrephes of:

2)He refused to welcome the apostles into the church.

3)He maliciously spread gossips about men of God.

4)He deliberately withheld help from other believers.

6)He excommunicated anyone that went against his stand.

Diotrephes was already an institution in that local church.The last point above(No 6) proved that he was not just an ordinary member of the church.He was a leader with certain authority which he abused.

Hummmm…Does it mean one should not aspire to be the best or number one in whatever God puts in your care? No! Please be the best you can ever be! Mediocrity is not a synonym of Godliness.Hone your skills, talents and gifts and be the best in your areas of calling.

Apostle John in this letter was describing one personality disorder that I learnt in my psychiatric posting then in medical school.

It is called a narcissistic personality disorder! Diotrephes had it!

If you marry a narcissist…you are in for a troublesome marriage.

If you have a narcissist as your boss…Trouble.

If you now have just one narcissist in your local church…You had better pray well or else that church is sitting on a keg of gun powder!

Narcissistic personality disorder is  a disorder in which a person has an inflated sense of self-importance and a personal egotistic need for power and admiration.Three things characterized this personality:

All these were seen in Diotrephes.He did not just love to be in charge(dominance),he disrespected Apostle John’s directives(arrogance).Don’t forget Apostle John was the oldest Apostle as at then yet Diotrephes never obeyed him.Also Diotrephes caused divisions within the church(hostility). Therefore,he was qualified to be called a narcissist!

How then do you know people with the spirit of Diotrephes?

1)Every discussion revolves around them,it starts with them,it ends with them…It is me,me and I.They will talk endlessly about themselves,and if at all they ask about you,they are not really interested!They only ask for ‘asking-sake’.

2)The spirit of Diotrephes will lay burdens and restrictions on others that he is not willing to take upon himself.Diotrephes forced people to respect his orders but was not willing to submit to Apostle John and other Apostles that visited the church.

4)It is a critical spirit.It will always be looking for faults in any decision taken by others.It is a spirit of destructive criticism.If you say ‘A’ ,he will say ‘Z’.Though he actually wanted to say ‘A’,but just because you said ‘A’,he must say ‘Z’ in order to fuel his ego.It is a spirit of antagonism!

If you have this personality,you need help! Don’t rationalise it. Don’t say you are  trying to help God’s work to progress.Diotrephes actually thought he was doing that by preventing his church from external influence of the Apostles.Little did he know he was a clog in the wheel of progress.Meanwhile Diotrephes was not an ordinary member of the church! Research showed he was probably the Bishop or Pastor of that church! That was why he had the authority to even send people that didn’t tow his line out of the church.Leaders be careful!

Are you a leader in whatever capacity and you notice you have these traits in you?

Do you antagonise every decision made by constituted authority?

Do you think all decisions are wrong except the ones you make?

Do you spread malicious nonsense about people of God in order to cause divisions?

Do you use your words to dissuade people from doing the good they want to do and yet you will not lift your finger to do anything?

Medically,because it is a personality disorder! This personality does not affect your relationship with people in the church alone,it affects your marriage,career etc.So the individual will need a psychologist and probably a psychiatrist for psychotherapy.

The problem now is that people who have this personality problem may never seek help because of their self -grandiosity! In fact they will never admit they have this disorder.So,help may be elusive to them!

Spiritually,because it can be a spirit! Evil spirits can attach themselves to these personality disorders to cause troubles in the church,marriages etc.So the  evil spirit needs to be cast out of his/her life.The problem here too is the fact that these people are likely leaders(they love to be in charge),so they may not be able to humble themselves before God and other ministers!

In conclusion,the spirit of Diotrephes is a destructive and divisive spirit.

If you see its manifestations in your church,marriage,organization, bind it and send it out.

If you have it,admit it and humble yourself by seeking help.