THE BATTLE ISN’T YOURS,IT IS GOD’S! 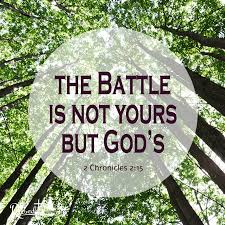 Have you ever been faced with situations beyond your human power?

Have you ever been surrounded by trials and temptations that challenge everything you have ever believed about God?

Are you going through terrifying circumstances that have defied human interventions?

Are you going through issues presently that you know it is only God that can deliver you?

If yes,let’s study similar case in the word of God.I know this message is for you!

“…This is what the LORD says: Do not be afraid! Don’t be discouraged by this mighty army, for the battle is not yours, but God’s.”-2 Chronic.20:15

Could you please repeat that scripture five times slowly until it sinks into your subconscious mind? Yeah! Personalise the scripture! Ok let’s continue:

A coalition of enemies came against Israel in this chapter .There was tension,fear,discouragement, depression,dejection and feeling of defeat as the vast enemies drew near to battle with them.However,in the midst of all these,Jehoshaphat led the  Israelites to seek the face of God.Suddenly,the Spirit of God fell on a man and prophesied the scripture you just read now:

THE BATTLE IS NOT YOURS,IT IS GOD’S!

Israelites thought this coalition of enemies gathered to fight them but little did they know that it was God the enemies came to fight! Not the Israelites at all !

This means there are battles that are exclusively God’s.Let’s discuss them:

1)When it is God that gives you something(not gotten through human manipulation) and there is now a coalition of enemies to collect it from you…The battle is of God.

2)When you are within the will of God for your life either by marriage, career,position or calling etc and hell is let loose on you…The battle is of God.

3)When you are working to expand the kingdom of God and the enemies come in like a flood…The battle is of God.

4)When you are a child of God and God is for you and the whole spiritual forces of evil in the heavenly realm are hell bent to fight you…Relax,the battle is of the Lord.

5)When you have committed your life to His service,and become a bond-servant to Him and the serpent wants to bite your heel…Then the battle is God’s.

The Israelites were faced with physical vast army but yours may be different.

Your vast army could be diseases that are destroying the Temple of God…The battle is of God.

The vast army facing you might be special temptations to overcome…Commit it to God’s hands like Jehoshaphat did and God will fight His battle.You have been failing because you thought it was your battle…You have been praying:’God come and help me’ instead of ‘God come and fight your battle’!

The vast army facing you might be bad habits or addictions.You have prayed,fasted and gone through many counselling sessions with no success.You thought it was your battle so you have been fighting it with your own strength! I am here to announce to you today:

THE BATTLE IS NOT YOURS,IT IS GOD’S.

“The LORD himself will fight for you. Just stay calm”(NLT)

“The LORD is fighting for you! So be still!”(GWB)

2 thoughts on “THE BATTLE ISN’T YOURS,IT IS GOD’S!”