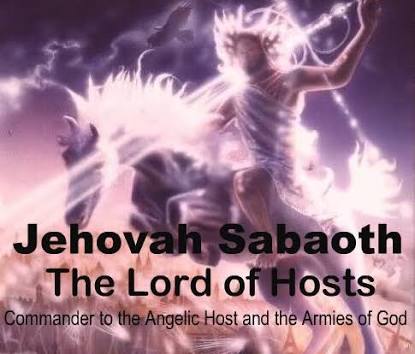 God was called different names in the Old Testament but I will want us to study this one that is related to spiritual warfare:

THE LORD OF ARMIES or

THE LORD OF HOST or

THE LORD OF POWER

Our God is a God of war!

He led many physical battles in the Old Testament for his chosen nation(Israel) and won all except where Israelites decided to battle without Him.

Jehovah Sabaoth wrapped Himself into His Son in the New Testament,fought spiritual battle and ‘disarmed the rulers and authorities, He made a public display of them, having triumphed over them through Christ.’-Col 2:15

And when Christ(The Captain of the Lord of Host) rounded off the greatest battle of all ages,He ‘went to the highest place, he took captive those who had captured us and gave gifts to people’-Eph 4:8

The battle has been won! But why do Christians still engage in spiritual warfare?

During the battle/hostility,Jesus Christ(The Seed of the woman) struck the head of the Serpent therefore he became disoriented and he is now looking for the other seeds of the woman so as to strike their heel and then they limp and fall !Hence Paul admonished us ” ...having done everything stand.Stand firm then …with your feet fitted…”-Ephe 6:13-14.Though Jesus gave the Serpent a deadly blow on his head, he was not chained/tied down.He is still moving around like a roaring lion looking for someone to devour.He will only be chained just before the Millennial reign:

“And he seized the dragon, that ancient serpent, who is the devil and Satan, and bound him for a thousand years”-Rev 20:2

So till then Christians need to allow Jehovah SABAOTH to lead and fight their battles and at the same time they still need to put on the whole armor of God and enforce the victory given to them by Christ.

I don’t know the Bible some ‘hypergrace’ teachers read by saying there is nothing called spiritual warfare.That is grandiosity and self delusion of the highest order…and the devil likes people who take him for granted!

Having known the meaning of Jehovah Sabaoth,I will like to mention the individuals that first used the name in the Bible.Guess?

1)Hannah:“And she made this vow: “O LORD of Heaven’s Armies(JEHOVAH SABAOTH), if you will look upon my sorrow and answer my prayer and give me a son, then I will give him back to you.”-1Sam 1:11.

Why did she call God Jehovah Sabaoth? There was a spiritual war that Hannah couldn’t win on her own.Hannah wanted the Lord of Host to help her silence the persistence mockings of Peninnah.The sorrow of Hannah was being amplified every now and then by Peninnah and Hannah had to ask the Lord of Host to fight the battle for her.The Lord of Host took up the challenge and won.How? God opened her womb and her reproach was rolled away.

2)David:Unlike Hannah,we all know David was a warrior.He was the second person that used this name when Goliath mocked and insulted his God:

“David told the Philistine, “You come to me with sword and spear and javelin, but I come to you in the name of the LORD of Armies(JEHOVAH SABAOTH), the God of the army of Israel, whom you have insulted.

This was a physical war unlike that of Hannah.Goliath mocked David,but David knew he was mocking his God.He knew the battle was not his but God’s.So he challenged Goliath in the name of the Lord of Host.

Have you noticed these two people invoked this name as a result of them being mocked and insulted?

Jehovah SABAOTH is a no-nonsense God that arises to fight for His children especially when they are being mocked,ridiculed,or insulted by situations,circumstances,events,Satan or people.

Also this same God arises on behalf of those whose rights and privileges have been denied.The Lord of SABAOTH personalises their battle and fights for them:

“Look! The wages that you have [fraudulently] withheld from the laborers who have mowed your fields are crying out [against you for vengeance]; and the cries of the harvesters have come to the ears of the Lord of Sabaoth.”
JAMES 5:4 AMP

If you know any leader who deliberately or fraudulently witholds wages/salaries/promotion of their workers,tell him/her that he/she is incurring the wrath of the Lord of SABAOTH! He will fight for the defenceless.

The Lord of Armies has his messengers that He sends on errands.It should be emphasised that God has more angels than the devil.You see it is a spiritual short sightedness when you spend hours binding few demons in your prayer meeting without acknowledging the presence of many host of heaven around you!

Do you know God has more angels under His command than Satan?

Do you know only one-third of angels initially with God fell with Satan?

Do you know that two-third are in Heaven with God?

Why then are many Christians so demon-conscious that they forget the Holy Angels God could send in an instant.Read what Jesus said about this:“Do you think I cannot call on my Father, and he will at once put at my disposal more than twelve legions of angels?”-Matt 26:53.

A legion is about six thousand foot and seven hundred horse soldiers! So it means if Jesus Christ had called upon Jehovah Sabaoth that moment,He would have just ordered more than 72,000 angels to land in that vicinity that day! Ha!

I pray that Jehovah Sabaoth will fight your battles for you today.

Whatever it is that is mocking or ridiculing you like Peninnah,I pray Jehovah SABAOTH will silence such thing in your life.

Whatever it is that is challenging you to a battle like Goliath,thinking you will be defeated in the valley of life,Jehovah SABAOTH will rise with His host to fight the battle for you.