WHAT IS THE FUSS ABOUT SEXUAL IMMORALITY? 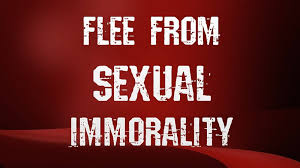 Is one sin greater than the other in the presence of God?

Why do people single out sexual immoralities(fornication,adultery,prostitution etc) as if they are greater sins than others?

I am trusting God to open the eyes of our understanding to comprehend what He has for us today.Let’s read 1Cor 6:18

All other sins a person commits are outside the body,

But whoever sins sexually, sins against their own body.”(NIV)

“Stay away from sexual sins.

Other sins that people commit don’t affect their bodies the same way sexual sins do.

People who sin sexually sin against their own bodies” (GWB).

There are sins you can resist,there are many sins you can fight.But when it comes to sexual immorality: FLEE!

But why? It is because it is synonymous to FIRE. In fact you can use sexual immorality and fire interchangeably: FLEE FIRE!

“A man can hire a prostitute for the price of a loaf of bread, but adultery will cost him all he has. Can you carry FIRE against your chest without burning your clothes? Can you walk on hot coals without burning your feet? It is just as dangerous to sleep with another man’s wife. Whoever does it will suffer…But a man who commits adultery hasn’t any sense. He is just destroying himself.”Proverbs 6:26‭-‬29,32(GNB)

There are three characteristics of fire relating to sin of sexual immorality that I want us to look at:

1)Fire is unconcerned about whatever it is destroying. Fire does not want to know how costly or precious a mansion is.

Fire does not know whether a car is new or not.

So is the sin of sexual immorality.It can burn down a precious relationship.It doesnt care whether a marriage is new or old.If the fire starts,it is indifferent to what it burns.

The fire of sexual immorality didn’t respect how great the  anointing of God upon Samson was.He played with fire and it burnt him down.

The fire didn’t give a damn about King David when he slept with Uriah’s wife.David toyed with fire and his hands got burnt.

Joseph unlike the two cases above, fled! This should be the right attitude to fire.I asked a group of sisters in a seminar of recent this question :” What is the first thing that comes to your mind when there is fire outbreak?” They all said they would first flee the vicinity and ensure they are safe! But do you know people rarely remember to flee sexual immorality like fleeing the vicinity of fire outbreak? Why? The reason is in the next characteristic of fire:

2)Fire has a power of attraction.Have you noticed many children want to play with fire? They do that because fire attracts them! It will take an adult to prevent many toddlers from touching fire.Children generally want to touch it,oblivious of the consequences.

In the same vein,sexual immorality is very attractive. In fact,people(especially the young ones) indulge in fornication because they find it appealing, thrilling and fascinating until they touch the fire and discover too late that it burns! What about the adult ones that indulge in adultery? Let me use an analogy from someone to answer this:”There may be excitement and enjoyment in sexual experience outside of marriage, but there is no enrichment. Sex outside of marriage is like a man robbing a bank: He gets something, but it is not his and he will one day pay for it. Sex within marriage can be like a person putting money into a bank: there is safety, security, and he will collect dividend.”

It can burn with gonorrhea…

It can burn with syphilis…

It can burn with Human Pappiloma virus…

It can burn with HIV…

It can burn with divorce…

It can burn with broken homes…

It can burn with broken hearts…