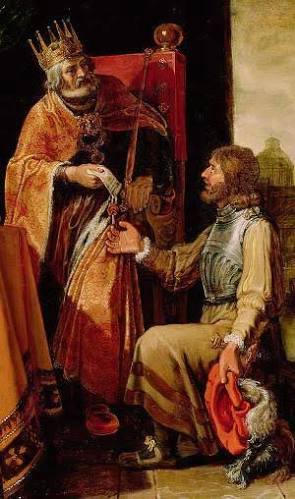 Let’s continue the series by studying what happened on the third night of Uriah in King David’s palace:

“At David’s invitation, Uriah ate and drank with him, and David made him drunk. But in the evening Uriah went out to sleep on his mat among his master’s servants; he did not go home.”-2 Sam 11:13

On that last night of Uriah in Jerusalem,King David decided to rob him of his strong resolution:He made Uriah drunk!

The aim of David was that Uriah would be so intoxicated that he would decide to go home and sleep with Bathsheba.Uriah didn’t go home!

I have a question: King David was not drunk when he decided to sleep with Bathsheba(another man’s wife),why did Uriah not go home and sleep with Bathsheba (his legitimate wife) despite the fact that he was drunk? Please try to proffer answers to this question.

By the morning of the fourth day,King David was ready with a new plan that would eventually put the scandal to rest.He decided to write a letter to Joab through Uriah:

In it he wrote, “Put Uriah out in front where the fighting is fiercest.Then withdraw from him so he will be struck down and die.”vs 15

1)Power intoxicates: You won’t believe that was King David that had two opportunities of killing King Saul but never did when he was still a servant. Read what he said,”I will not lift my hand against my master, because he is the LORD’s anointed.” As a servant,David didn’t murder his arch-enemy but as a King,he was ready to kill his faithful and honest subject! Power truly intoxicates!

You will have much power at your disposal when you get to the top,be careful how you intimidate others with such power.

2)A sin that is not confessed and repented of will lead to another.Unconfessed sins like to take spaces gradually in once heart.Let me quote an Arab proverb to explain this:

“The Arabs have a fable that once a camel came to the door of a tent and thrust in his nose. Not being resisted, he thrust in his feet. When there was no hindrance,he came half way in. After a while he got all the way in. The Arab said to the camel, “This tent is too small for two.” Then the camel said to the Arab, “If that be so, you had better leave.” So sin comes into the heart further and further, until it takes full possession. It is not satisfied until it has pushed the soul into an eternal prison house, and slammed the door, and shoved the bolts, and turned the locks of an everlasting incarceration.”

King David only allowed ‘small’ lust and when the lust conceived,it gave birth to one night stand of adultery and in order to cover up the scandal,he ended up commmiting murder!

My brothers and sisters,stop the vicious cycle today by repenting from that primary sin that started the cascade.Sometimes in a scandal,the primary sin could be a lie,theft or even lust as in the case of David.But now,the issue has become complicated because you have added more sins to the primary ones in an attempt to cover up the primary sins.

It is better to just halt that process now by confessing the sins to God.One more attempt to cover up that scandal with another sin might lead to what may affect your integrity and future generations.