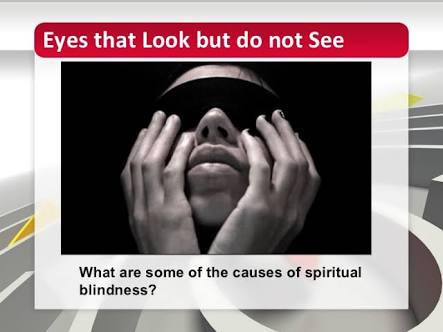 Having gone through the definitions of spiritual blindness in Part 1,let’s discuss the possible causes vis-à-vis  the three definitions.

1)IMMATURE SPIRITUAL EYES: This is the most common cause of spiritual blindness among believers.Apostle Paul had many of them as members in Corinth: Brothers and sisters, I could not address you as people who live by the Spirit but as people who are still worldly–mere infants in Christ.-2 Cor 4:4

Typically an infant is a baby under 1 year or at most 2 years.It means many people that think they are adults are seeing things like a 1-year old because their spiritual sight is still immature.They look at things but can’t see them.

2)RELIGION: Religion can make someone to be blind.Ask some people why they go to church ,they will tell you that they do that because they are born into that religion:”My dad is a christian,so I am a Christian” or “My dad is a pastor in so and so church,so by default I grow up as a Christian”. Such people are spiritually blind unless they have an encounter with Jesus like the man that was born blind.Even Paul was blinded by religion to the extent that he thought he was fighting for God by killing the believers.Read what he said about his spiritual  perception before he had an encounter:”I used to believe that I ought to do everything I could to oppose the very name of Jesus the Nazarene”-Act 26:9

The remaining causes of spiritual blindness can be grouped under the third definition outlined in Part 1.

3)SATAN: The devil can afflict the spiritual eyes of an individual resulting into diseased sight.

“The god of this age has blinded the minds of unbelievers, so that they CANNOT SEE THE LIGHT of the gospel that displays the glory of Christ, who is the image of God”- 2 Cor 4:4

By now, you should know the reason why some unbelievers find it difficult to accept the gospel:The devil has made them blind by putting a veil on their face such that It is like trying to explain the shape of an aeroplane to a man who is blind from birth:If you say the plane is like a bird,he has never seen a bird before.So what the man needs from you is not higher argument or theological exegesis,he needs sight restoration first.

4)GREED: This is rampant among the leaders.If you are a leader in church,government etc,please pay attention to this.Greed for money,fame or position can make you go blind spiritually.

Prophet Balaam was so greedy that he was willing to use his God-given talents for illicit purposes.He compromised his beliefs after receiving financial inducement. Though he knew Balak was God’s enemy, he was ready to use his prophetic gifts to help him.When greed entered Balaam,it overwhelmed his sight to the extent that he did not see the angel of God that stood on his way.A whole prophet of God had become spiritually blind because of greed.

What are your ulterior motives before you go out for those ministrations? Why are you organising those ‘soul winning’ programs of yours? Did you get a go-ahead from God? If there are no monetary gains will you still do them? The answers to these question will establish whether greed for money has made you blind or not.

5)FEAR: It can make someone to suddenly become blind to all the promises of God.Fear is a destructive spirit!

It suddenly blinded the eyes of Elisha’s servant to all what God had used Elisha to do.He was so afraid when he saw the army of Syria that surrounded the city.

“When the servant of the man of God got up and went out early the next morning, an army with horses and chariots had surrounded the city. “Oh no, my lord! What shall we do?” the servant asked. “Don’t be afraid,” the prophet answered…”-2Kings 6:15-16.

Do you suddenly forget all the promises of God when you see all the qualifications of those applying for the same job you are interested in? In the face of intimidation from higher authorities,do you give up on God as if His promises are invalid? If yes,fear is the cause of your spiritual blindness.

6)DISCOURAGEMENT: This occurs when your expectations are not met.You may become dejected and discouraged to the point where you have selective amnesia to what God can do or is doing in your life.The disciples of Christ that Jesus met on their way to Emmaus are typical examples.They didn’t know Christ had resurrected, so when he  met them:”They stood still, their faces downcast”because they thought Jesus was no longer alive.Read it up in Luke 24:13-29.

Let’s see Jesus’ reaction to them when he joined them on the road: “How foolish you are, and how slow to believe all that the prophets have spoken! Did not the Messiah have to suffer these things and then enter his glory?” And beginning with Moses and all the Prophets, he explained to them what was said in all the Scriptures concerning himself” vs 25-27

Discouragement made them insensitive to all what Christ had told them earlier before His death.

7)HATRED: Do you just have unexplained hatred to people around you? If yes,you are spiritually blind! I didn’t say that,read it here:

Have you noticed that many murderers become remorse after being caught? This is because when they were committing the crime,hatred and rage blinded their eyes.When members of a church are up against each others,hatred has actually blinded them spiritually so that they are unable to see clearly.

The points listed above might not be the only causes of spiritual blindness,so you are free to add yours.