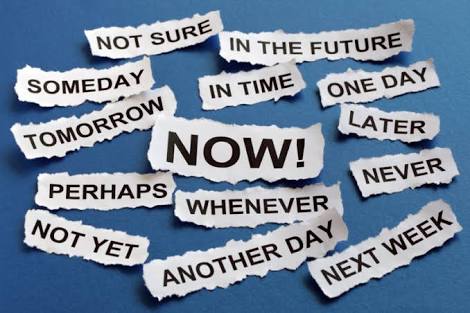 There was a man who took his son to the doctor because he swallowed their house key.

The Doctor asked, “When did this happen?”

The Man answered, “About 3 Months ago.”

Doctor said, “Why are you finally bringing him in now?”

The man said, “Because now we’ve lost our duplicate key.

What is procrastination? Clinical psychologists define it as voluntarily delaying an intended course of action despite expecting to be worse off for the delay.”

In other words,for a behavior/action to be categorized as procrastination,it must be:

What are the causes of procrastination?

A)FEAR: The Israelites army could not face Goliath for forty days because they were afraid of him.They were intimidated by his military conquests,experience and armoury. Fear was the major reason none of them could volunteer to fight Goliath until David took the bull by the horns.

“On hearing the Philistine’s words, Saul and all the Israelites were dismayed and terrified…For forty days the Philistine came forward every morning and evening and took his stand…Whenever the Israelites saw the man, they all fled from him in great fear.”-1Sam 17:11,16,24.

Today,we are not being threatened by Goliath with flesh and blood.We are not being faced with the Goliath that only comes morning and night.The present day Goliath wars against our souls by piercing our hearts with fear through our thoughts every time of the day.

Many are still undecided today about matters that concern the salvation of their souls.They have been told the consequences of their actions yet they neither stand for God or go with the Devil.It could be disastrous sitting on the fence,because one can be hit by missiles from either side.

C)LAZINESS: I could remember when I was about to write my secondary school certificate exam,a thought came into my heart that I should be praying that Jesus Christ would just come before the exam so that I wouldn’t have to go through the stress of the exam! Hahahaha! See laziness camouflaged in religiosity! Thank God I never listened to such thought,I would have failed woefully, because it is almost 20years now,Christ has not come.

Whenever a lazy man is sent, he says, “A lion is in the road”; “a lion is in the midst of the streets.”Like a door that swings around on its hinges, so the lazy man turns on his bed.-Prov 26:13-14

D)”GOOD” ALTERNATIVES: From the story I narrated in the introduction,one can see that the man procrastinated because he had a duplicate key.It was when the duplicate key got lost,he remembered to take the child to see the doctor.

Many have refused to take certain decisions that can turn their lives around because they think they are comfortable now. The Bible has a piece of advice for you:

So then, be very careful how you live. Don’t live like foolish people but like wise people.Make the most of your opportunities because these are evil days-Eph 5:15-16

The lazy person will not plow during the planting season, so at harvest time he looks for the crop but has nothing-Prov 20:4

The habit of always putting off an experience until you can afford it, or until the time is right, or until you know how to do it is one of the greatest burglars of joy. Be deliberate, but once you’ve made up your mind–jump in.”– Charles R. SwinLamb

A year from now you may wish you had started today.”– Karen Lamb

Make that life-changing decision today.Challenge that ‘Goliathistic’ problem.Stop procrastinating issues pertaining to eternity…for now is the day of your salvation.