THE BOOK OF HAGGAI- PART 1 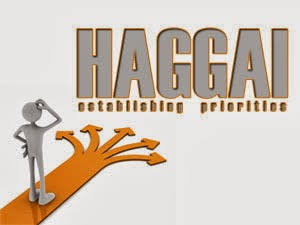 Are you ready for this Bible study? It promises to be deep,incisive and informative.If you are set,let’s begin.

Prophet Haggai was one of the Minor Prophets.He was called a minor prophet because  his prophecies were short not that he was inferior to the Major prophets.

What are the uniqueness of the Book of Haggai?

1)It contains just 2 chapters and Prophet Haggai only released 4 separate prophetic messages over a period of 5 months! After that nothing was heard of him.Though the period was short,he made  a deep impart on the nation.

2)He was one of the few prophets in the old Testament that prophesied God’s words and people obeyed almost immediately. He first spoke God’s mind to the people on August 29, 520 BC.However,by September 21st 520 BC, the whole nation was willing to act on what he said.In other words,within 23 days,a whole nation was brought to their knees.

Let’s check out the first message Prophet Haggai had for the nation:

“This is what the Lord Almighty says: “These people say, ‘The time has not yet come to rebuild the Lord’s house.’-Haggai 1:2

First,it can be revealed from the above passage that God hears everything you say! I mean,everything. Can you recall some of your conversations in the last 24hours,which of them do you wish God never heard? The truth is that He heard everything! He is Omnipresent.There is nothing called a “closed -door” meeting with Him.He is everywhere,so He hears everything you say including what you say even in your thoughts!

In the second place,God brought Israelites back from Babylon with a clear instruction to rebuild the Temple.They started but stopped the work for about 16years.

Why did they stop? What caused this lethargy and indifference to the work of God? Two things actually caused it:

1)External opposition: This was not explicitly stated in the Book of Haggai as a cause of the stoppage. However,it can be seen in the Book of Ezra 4:4-5

“Then the peoples around them set out to discourage the people of Judah and make them afraid to go on building.They bribed officials to work against them and frustrate their plans during the entire reign of Cyrus king of Persia and down to the reign of Darius king of Persia.”

The external threat from their enemies(Samaritans) made them to stop the rebuilding of the Temple.

The Israelites could tell people that they stopped because of the opposition but could they tell God that? I don’t think so…God could see the motives behind their action.So,what did God see?

2)Internal struggles: These are not usually obvious.Only God could have seen these struggles within their hearts.Granted,there were external encumbrances preventing them from building the Temple,but the internal struggles between their selfishness and doing God’s work were the major reasons behind their nonchalant attitude.

God through Haggai only asked a simple question to settle the fight between their soul and spirit: “Is it time for you to live in your paneled houses while this house lies in ruins?”-Hag 1:4

There were oppositions to the rebuilding bla bla bla…

But why was there no opposition from the enemies against the building of your own luxurious houses?

#Their lips were sealed#Mouth closed#.

The simple reason they stopped was about what they prioritized.They preferred to pursue their own interests first before God’s.

Men that will speak God’s words in Spirit and in truth without compromise.

Men whose God’s words will be like swords in their mouth.

Men that will not just look at things superficially but go deep to reveal the selfishness of people’s hearts.

Men that will not say what people want to hear but will reveal the mind of God concerning any matter.

Where are the Haggais  for our nation today?

This is just the tip of the iceberg…More to come from this explosive Bible study.