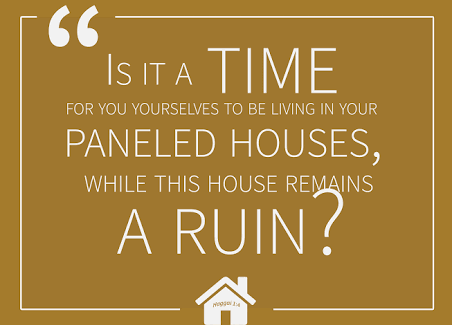 I welcome you to today’s online Bible study in Jesus’ name. The focus will be on the second question raised in the introduction.

Does serving God mean one should live in squalor? What is the true application of the message of Haggai to the present day believers?

“Is it the right time for all of you to live in your own paneled houses while this house remains in ruins?”-Haggai 1:4

This verse has been misinterpreted by some to mean that it is a sin to live in nice houses! It is a false assumption.Let’s pay attention to the highlighted words above.

God was not in anyway averse to Israelites building houses for themselves.He only asked them if it was the RIGHT TIME for them to build houses when the Temple was in ruins.That was pertinent because they were doing the right thing at the wrong time.

Gehaz became a leper partly because he collected gift from Naaman at a wrong time.

Elisha said to Gehaz: “Is this the time to take money or to accept clothes—or olive groves and vineyards, or flocks and herds, or male and female slaves? Naaman’s leprosy will cling to you and to your descendants forever.” -2 Kings 5:26.

What the above verse means is that Gehaz might have been justified to collect the gift at other times,however,it was wrong to collect it at that time.

We learnt in Part 1 of this teaching that God gave His people a mandate to go and rebuild His Temple but because there was an opposition to it,they stopped building not just for a year but for good 16 years! During those years,guess what they were busy doing: Building their own panelled houses.This will lead me to the second highlighted words.

What were panelled houses then? They were luxurious houses roofed with panels.In pre-exile days in Israel,panels were only found in two places: Temple and royal palace.

“When Solomon finished building the temple, he panelled it with boards and planks of cedar”-1Kings 6:9.

Fast forward to the days of Haggai,people were using the boards and planks to build their personal houses while the Temple was in ruins.

There is nothing wrong if you are opportuned to live in nice houses,ride the latest car or fly around in your private jet.However,if the answer to the following two questions is NO,then you need to reconsider your ways:

Are you sure this is the time for all these?

Have you put God first before your personal aggrandizement?

If the answer is YES,then you are good to go! Godliness is not the synonym of poverty.

So far,we have succeeded in scratching the surface of the message in the Book of Haggai. How?

I have noticed these days that this first chapter of Haggai is usually used to encourage people to support church projects.Members are reminded of the fact that they should do God’s work before theirs.

That is good! It is fine and rewarding to make sacrifice but that is not the real essence of the book to us  as believers.The application of this chapter  to us as christians today is deep.In fact, to limit this chapter to that literal interpretation is half- truth.How do I mean?

That is the trend the whole Bible follows:

The first man that came was natural,the second man was spiritual.

“For if that first covenant had been faultless, there would have been no occasion to look for a second”-Heb 8:7

In fact,the gospel was  first to the Jew, then to the Gentile.-Romans 1:16

So the first Temple was a physical structure but the second Temple is a spiritual  edifice being built as the body of Christ.

In other words,the concept of physical Temple is no longer applicable to us now!

Hello sir/ma,your well equiped,digitalized church should not be interpreted as the Temple mentioned in Haggai! Granted,it makes you comfortable and all that but:

It is you…I mean…You…Yes…YOU ARE THE TEMPLE OF THE LORD not the church building!

“Don’t you know that you yourselves are God’s temple and that God’s Spirit dwells in your midst?”-1 Cor 3:16

And you are living stones that God is building into his spiritual temple-1 Peter 2:5

And in him you too are being built together to become a dwelling in which God lives by his Spirit-Eph 2:22

If you are the Temple,who are those given the mandate to build and also raise other builders for this spiritual Temple?

“And he gave the apostles, the prophets, the evangelists, the pastors and teachers, to equip the saints for the work of ministry, for building up the body of Christ until we all attain to the unity of the faith and of the knowledge of the Son of God, to mature manhood…”-Eph 4:11-12

What if you are not a Pastor or an evangelist etc? The work of building others also concern you:

“So encourage each other and build each other up, just as you are already doing”-1 Thesis 5:11

If Prophet Haggai were to be alive today,he would have asked us the same question but in different context: “Is it the right time to amass wealth for yourselves while my Temple is in ruins?” The ruined Temple is a symbolic representation of lukewarm Christians and the perishing souls.

The message for the believers is to stop their selfish pursuits and rise up to build the Temple and raise disciples that will also do same until they all reach maturity.

It is written for us to wake up from our spiritual lethargy and build up the Temple in ruins(the perishing souls).Let’s gather them together and let them be laid on the sure foundation of Christ- the Chief Cornerstone.