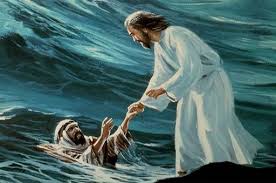 I want to welcome you to the Sunday edition of Rhema Blog in Jesus’ name.

In the first part of my thesis in the last post,I established the truth that every man has a measure(metron) of faith given to him by God.So if you want to fully understand this post then you have to read the previous one here.The second part (b) of the thesis which is the man’s response to this degree/measure of faith will be our focus today.

The b part of the thesis statement says that if a man is operating below the measure of faith given to him by God then he has little faith(oligopistos).Since Christ was the only one that used this terminology in the Bible,let’s see how it was used:

Jesus addressed people as having little faith(oligopistos) five times in the synoptic Gospels: 4 out of these were specifically to His disciples and only once to the crowd.We shall be looking at all these instances.

1)Let’s start with the first example:

“Then he got into the boat and his disciples followed him. Suddenly a furious storm came up on the lake, so that the waves swept over the boat. But Jesus was sleeping. The disciples went and woke him, saying, “Lord, save us! We’re going to drown!”He replied, “You of little faith, why are you so afraid?” Then he got up and rebuked the winds and the waves, and it was completely calm.”-Matt 8:23-26

Now I no longer wonder why Jesus Christ was so ‘harsh’ on His Apostles:He knew the capacity they should be operating on and they were below par! Just like the example I gave in my last article of a high school leaver who could not solve a primary school arithmetic, His disciples too were like that early in the ministry. Hence, He chastised them of having oligopistos.

What did Christ expect from His Apostle? Simply,He expected them to respond to the raging storm but instead they ran away from such responsibility by waking up Him up to help them.Someone once described responsibility as having two words in one:

Therefore,a man can be said to be irresponsible when he doesn’t respond appropriately to his inate ability! We can now understand how bad Jesus must have felt when He knew the disciples could have asked the storm to be calm.

2)Jesus also rebuked His disciples as having little faith when He was talking to them about spiritual matters but they were thinking about carnal things!

“Be careful,” Jesus said to them. “Be on your guard against the yeast of the Pharisees and Sadducees.” They discussed this among themselves and said, “It is because we didn’t bring any bread.” Aware of their discussion, Jesus asked, “You of little faith, why are you talking among yourselves about having no bread?-Matt 16:6-8

Jesus was like :”Out of all what I said,it was only ‘we have no bread’ you can deduce from it?”(mine) Is that not what happens today? From today’s message in Church,can you point to one spiritual thing you gained from it? Was your mind on spiritual issues?

Jesus was so miffed with them that He had to remind them that they didn’t even need to bring bread in the first place for them to be fed:

“Do you still not understand? Don’t you remember the five loaves for the five thousand, and how many basketfuls you gathered? Or the seven loaves for the four thousand, and how many basketfuls you gathered? How is it you don’t understand that I was not talking to you about bread? But be on your guard against the yeast of the Pharisees and Sadducees.” vs 9-11

Sometimes we need to be reminded of things God had done in our lives in the past because we tend to forget His faithfulness quickly.

If He could feed 5000 men with little resources, couldn’t He also feed them if the need arose? Yes,He could but they were so weak in their faith that they worried about inconsequential things.

3)That leads me to the third instance where Christ rebuked people of having little faith.This time,it was not the disciples but the crowd:

“Can any one of you by worrying add a single hour to your life?“And why do you worry about clothes? See how the flowers of the field grow. They do not labor or spin. Yet I tell you that not even Solomon in all his splendor was dressed like one of these. If that is how God clothes the grass of the field, which is here today and tomorrow is thrown into the fire, will he not much more clothe you—you of little faith?”-Matthew 6:27-30

Can you identify the reason why Christ said they had little faith? Yes! They refused to apply the knowledge of what they knew about God’s ability therefore they became worried.They couldn’t appreciate the fact that if God could cloth ordinary flowers, they didn’t need to be bothered about God clothing them! (I will expantiate on this later).

4)The fourth example is a popular one: When Christ asked Peter to walk on the water but he doubted midway.

“Immediately Jesus reached out his hand and caught him. “You of little faith,” he said, “why did you doubt?”- Matt 14:31

This reminds me of Rhemablog past article on the Hebrew meaning of faith(ĕmûnâh):firmness,steadiness,stability etc. Can you still remember? If not,read it here.

5)The last example is when a boy that had seizures was brought to Christ’s disciples and they couldn’t heal him:

” Then the disciples came to Jesus in private and asked, “Why couldn’t we drive it out?”He replied, “Because you have so little faith. Truly I tell you, if you have faith as small as a mustard seed, you can say to this mountain, ‘Move from here to there,’ and it will move.Nothing will be impossible for you.”-Matthew 17:17-20

The inference from the response of Christ is that it is not the size of your faith that matters,whether little or great! What really counts is your response to the ability in you.In other words,a faith is as little or great as your response to God’s ability in you and not in the size because if the faith is as small as the tinniest seed in the world,it will still work efficiently.

This is just the preamble…On Wednesday, I will draw out some characteristics of ‘little faith’ and thereafter consider ‘great faith’.

Till then,go and exercise your faith.The word is near your mouth.Which word? The word of faith! Go in this strength of yours and speak the word of faith into your storm.