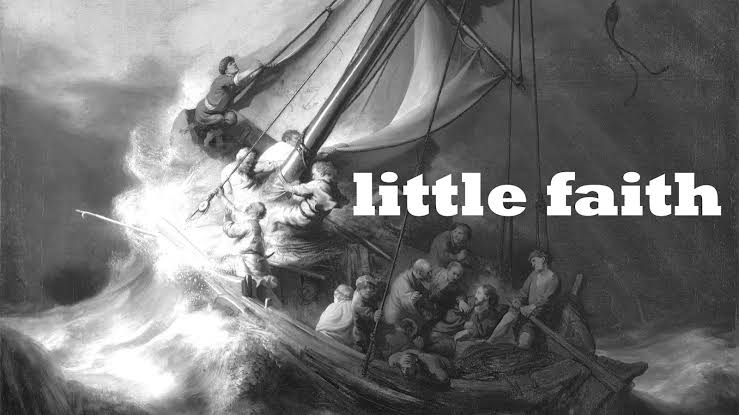 From the last two previous posts,we have been able to establish that God gives every man a measure of faith and that it is the response of the individual to this ability from God that determines whether the faith is little or great.In this Wednesday edition of Rhemablog,I want us to look at what characterised people that Jesus referred to as “You of little faith“.

Note: Kindly read the Part 1 of this article here before proceeding, if you have not.

1)They do not put the knowledge of God they have into action: There is a time to learn and a time to apply the knowledge that has been acquired.I remember a conversation one of my teachers in medical school had with my clinical group some years ago.He said,”Do you know the reason why you medical students use black tag on your ward coat?” He continued, “The tag is black so that patients can identify you as ‘dangerous’ for now!” Though he really hit us below the belt with those words,what he said was the truth:We were still in the learning phase of our training, we were not yet doctors!We had not been given the certificates to practise.However,after graduation,it was time to put the things learnt over the years into action by treating patients.

A person is said to have a little faith when he refuses to put the knowledge of God he has into action.He is ever learning but never doing anything! He is comfortable to learn the theories but runs away from the practical sessions.

For example the disciples demonstrated this trait in two instances: During the storm and when they didn’t remember to bring bread…I already discussed them here.They had gone through some teaching sessions under Christ but when there was an opportunity to practise what they had learnt,they refused to respond to their abilities.Also,if Jesus could feed 5000 men,shouldn’t they know He could provide bread for them? But they were unable to apply that knowledge therefore Christ addressed them as people of little faith.

2)They worry over unnecessary things: While there are things that are of temporal values,there are things that have eternal excellence.People of little faith concentrate on the former! When Christ addressed the crowd in Matthew 6 as discussed earlier on,He mentioned things that should not be their primary preoccupation: Things to wear,things to eat etc.Not only that,He told them what should be their focus: The kingdom of God and His righteousness.

Today,in the developing countries of the world where people still struggle to have decent lives due to poverty,lack of food,lack of shelter etc they will find these words of Christ to be infuriating! ‘How then will I eat if I don’t become worried’ will be their response!

Let’s now move to the developed countries where there are excellent standards of living.You would think that these words of Christ were not applicable to them too! Wait a minute…

Have you heard about this term :Consumerism? One of its definitions is: The human desire to own and obtain products and goods in excess of one’s basic needs such as food, clothing and shelter.

That defines the worries of those in advanced countries!

While the developing countries worry over lack of basic needs of life,the developed nations worry over what to choose out of many options such that they end up buying things they may never need.Both are pursuits over nothing!They are things without eternal values and should not be our primary preoccupation.

“Seek the Kingdom of God above all else, and live righteously, and he will give you everything you need”.Matt 6:33

“But more than anything else, put God’s work first and do what he wants. Then the other things will be yours as well.” (CEV)

3)Their faith lack the necessary conditions for growth: Can you still remember the boy that had seizures that was brought to Jesus’ disciples to heal? Yeah…Lets go back to the story to explain this concept.After Jesus rebuked the disciples,He healed the boy and the following conversation began between them:

“Then the disciples came to Jesus in private and asked, “Why couldn’t we drive it out?” He replied, “Because you have so little faith. Truly I tell you, if you have faith as small as a mustard seed, you can say to this mountain, ‘Move from here to there,’ and it will move.Nothing will be impossible for you.” Matt 17:19-20

However, this kind does not come out except by prayer and fasting.” Matt 17:21

In the same vein,Jesus metaphorically described faith as a mustard seed.God sows a measure of faith like a seed in each of us but certain harsh conditions could stiffle it:

“The farmer sows the word.Some people are like seed along the path, where the word is sown. As soon as they hear it, Satan comes and takes away the word that was sown in them. Others, like seed sown on rocky places, hear the word and at once receive it with joy.But since they have no root, they last only a short time. When trouble or persecution comes because of the word, they quickly fall away. Still others, like seed sown among thorns, hear the word;but the worries of this life, the deceitfulness of wealth and the desires for other things come in and choke the word, making it unfruitful.“Mark 4:14-19

One heart couldn’t put its faith into action before Satan took away the knowledge acquired by it because the soil was too superficial(pathway).Also,another heart became broken and disoriented in the presence of challenges that came to test its integrity because the heart lacked depth.Yet another heart became unfruitful because of worries over unnecessary things!

However: “Others, like seed sown on good soil, hear the word, accept it, and produce a crop—some thirty, some sixty, some a hundred times what was sown.” Mark 4:20

What are the conditions that made these seeds of faith to germinate and become fruitful?

These conditions will be discussed as part of the series on “Great Faith” that will hit the internet this weekend.

We shall see on Saturday, God willing…