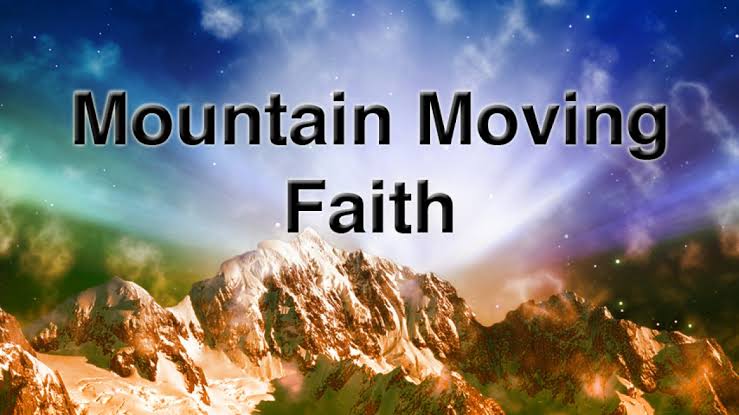 The crowd thronged Jesus and the three disciples as they came down from the Mount of Transfiguration(probably Hermons) and there came a man with a specific request:

“Lord, have mercy on my son,” he said. “He has seizures and is suffering greatly. He often falls into the fire or into the water.I brought him to your disciples, but they could not heal him”-Matt 17:15-16

Ab initio,there was a problem while Jesus, in company of Peter,James and John,was on the mountain: The nine other disciples were being embarrassed!Jesus’ critics probably some Pharisees and Sadducees in the crowd were already sneering at those helpless disciples.How did I know? The response of Christ to the man’s request was targeted towards these doubters:

The above quotation was not referring to Christ’s disciples but to those who were already thinking that provided the disciples of Christ had failed in casting out the demon then the ministry of Christ was fake!

There are issues in your lives that make people think that God is a failure! I declare today that God will prove such critics wrong by your success in the name of Jesus! Amen

“Bring the boy here to me” Jesus rebuked the demon, and it came out of the boy, and he was healed at that moment”-vs 17b-18

Suddenly, every critical voice in the crowd became still!

However, there was a concern by the nine disciples that were marooned by the incident:They once drove demons out and prayed for the sick before.Demons had once bowed down before them.Why couldn’t they repeat the same feat in this incident? They were troubled and so they came privately to see Jesus.

“Then the disciples came to Jesus in private and asked, “Why couldn’t we drive it out?” vs 19

Simply they asked Jesus: Why did we fail? What did we do wrong? Or “What did we not do right?”

Don’t go a step further after stumbling along life’s path without ascertaining the reason for the fall because if you do,you might still fall into the same ditch! So ask yourself: Why did I fall? Was it a self-induced,demon-induced,circumstantial-induced or God-allowed fall.This is what I term a moment of truth where you sit down quietly alone with your Maker to ask sincere questions from your heart.

Every great man that you see today must have asked himself these questions several times! Greatness of a man does not preclude failures but it is always an offshoot of a constant reassesment of why he failed.

Joshua, for example, was a great man that God was with as it can be read in the last verse of Joshua Chapter 6:

“So the Lord was with Joshua, and his fame spread throughout the land.” vs 27

Nevertheless,the first word in the next Chapter (7:1) starts with ‘But’ !

“But the Israelites were unfaithful in regard to the devoted things; Achan son of Karmi, the son of Zimri,the son of Zerah, of the tribe of Judah, took some of them. So the Lord’s anger burned against Israel.” 7:1

Joshua didn’t know about the incident above! He just proceeded with the mindset of Joshua 6:27 that was quoted above! He took a step further to conquer Ai,a very small town.Intelligence information that reached Joshua said:

“There’s no need for all of us to go up there; it won’t take more than two or three thousand men to attack Ai. Since there are so few of them, don’t make all our people struggle to go up there.” vs 3

And they went to Ai…

“So approximately 3,000 warriors were sent, but they were soundly defeated“-vs 4

Then came the moment of truth for Joshua and the Elders:

“Joshua and the elders of Israel tore their clothing in dismay, threw dust on their heads, and bowed face down to the ground before the Ark of the Lord until evening.Then Joshua cried out, “Oh, Sovereign Lord, why…”vs 6-7a

While the disciples went to meet Christ directly,Joshua and the elders had to pray to God to get the reason for their failure.Either way,they all got responses they wanted.If we shall be sincere with our resolve to know,God is always interested in telling us why a thousand is fleeing at the threat of one;and all fleeing away
at the threat of five!(Isaiah 30:17).

God’s response to Joshua: “Stand up! What are you doing down on your face? Israel has sinned; they have violated my covenant, which I commanded them to keep. They have taken some of the devoted things; they have stolen, they have lied, they have put them with their own possessions.That is why the Israelites cannot stand against their enemies…”vs 10-12

Jesus’ response to the nine disciples:“Because you have so little faith. Truly I tell you, if you have faith as small as a mustard seed, you can say to this mountain, ‘Move from here to there,’ and it will move.Nothing will be impossible for you.” -Matt 17:20

Why is your thousand fleeing from just one threat?

Why is a small matter causing havoc in a person with the Holy Spirit?

Why has the gold become dull?

Why the recurrent failures?

Seek the reason and you shall find…You must not make the same mistake again: Learn from your fall.

This is just the tip of the iceberg!!!