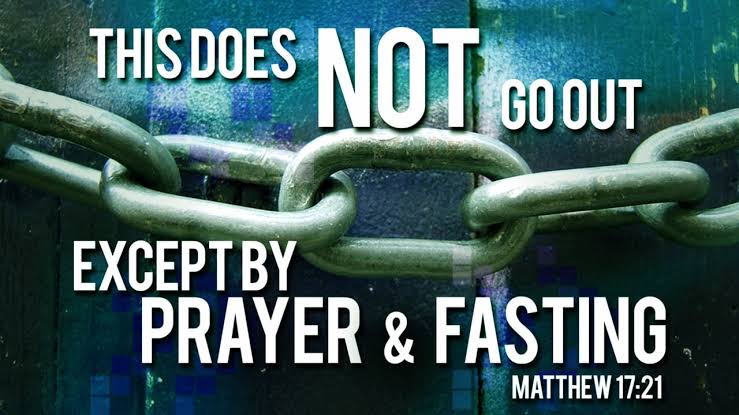 There are two ways in which this verse can be interpreted:

The verse could mean this kind of mountain does not move or this kind of evil spirit does not go out except…Why? There are some mountains that have demonic roots.Evil spirits also have different levels of virulence,that is,some are more wicked than the other.Therefore,such mountains or evil spirit won’t just move or go out easily without some fight. There are mountains that move at the slightest sight of your faith.There are evil powers that leave with just 5minutes of prayers but there are some strong ones that won’t leave but rather ask you question like this:

Such spirits will not go out without seeing your ‘identity card’ and most importantly they won’t leave without a fight because they have built a stronghold either in the body of the person or inside the mountain.In other words,they are strong men that require stronger force for them to pack out.This is what Jesus said about this point:

“How can anyone enter a strong man’s house and steal his possessions, unless he first ties up the strong man? Then he can plunder his house”- Matt 12:29 (Berean Study Bible)

Let me use another translation to explain it better:

“For who is powerful enough to enter the house of a strong man and plunder his goods? Only someone even stronger—someone who could tie him up and then plunder his house”NLT

So,it takes a stronger man to tie up the strong man! Hmmmmm…

What can we learn from this? Some situations may require some extra efforts from you.It is not that if you call the name of Jesus Christ every knee will not bow…They bow! They even tremble!

But do they move out? We are talking about movement of mountains here, we are not saying they won’t bow down.We are talking about evil spirits coming out of their stronghold…Landlords will understand the difference between tenants paying obeisance to them and packing out of the house better.For some tenants,until the landlord uses force to drive them out,they will remain in the house saying ‘yes sir, yes sir’ to the landlord!

All those stinking, impure,wicked evil spirits that have colonised the temple of God in your life…All those strong mountains trembling before you but have refused to move out…In the name of Jesus’ Christ,I command them to leave and go into the desert now!!!

Let me summarise both the points I raised last Sunday and those of today using only one miracle of Christ.Don’t mind the long verse,please read slowly.

NB: I insert in bracket all the concepts I have raised so far:

“When Jesus got out of the boat, a man with an impure spirit came from the tombs to meet him. This man lived in the tombs, and no one could bind him anymore, not even with a chain. For he had often been chained hand and foot, but he tore the chains apart and broke the irons on his feet. No one was strong enough to subdue him(Concept of the strong man).Night and day among the tombs and in the hills he would cry out and cut himself with stones.When he saw Jesus from a distance, he ran and fell on his knees in front of him(Concept of evil spirit bowing down,but not coming out). He shouted at the top of his voice, “What do you want with me, Jesus, Son of the Most High God? In God’s name don’t torture me!” (Concept of evil spirit checking your ‘identity card’) For Jesus had said to him, “Come out of this man, you impure spirit!”Then Jesus asked him, “What is your name?”My name is Legion,” he replied, “for we are many.” And he begged Jesus again and again not to send them out of the area.(Concept of mountain- skipping/movement) A large herd of pigs was feeding on the nearby hillside.The demons begged Jesus, “Send us among the pigs; allow us to go into them.”(Concept of evil spirit being sent to the desert,here,they prefered nearby location!). He gave them permission, and the impure spirits came out and went into the pigs.The herd, about two thousand in number, rushed down the steep bank into the lake and were drowned”-

Now you know that all these points are not mine…I couldn’t have planned this! Up till now,I never knew these points were inside this miracle of Christ.

Please,contrary to what I promised on Sunday,I won’t be able to write on prayer and fasting for now.I still need to teach on some concepts before I teach on it.I am very sorry.It is beyond my control.God willing,I will discuss the second interpretation of the topic “…this kind does not go out” on Saturday.