Aug 4, 2019 Indications for fasting and prayers, When to fast 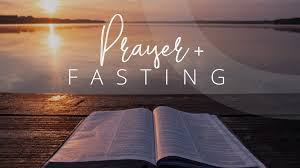 The Bible says we should ‘pray without ceasing’.However,there are certain situations different from the routine communication with our God in which we set time apart to fast and pray like Jesus did at the beginning of His ministry.Those are the situations I started highlighting from yesterday’s post (Read it here).For those that don’t know whether they are fit to fast,they can read an article on it here.

Today,I want to continue from where I stopped on Saturday:

d)When you need to humble yourself before God as a sign of repentance: In the Old Testament,fasting period was a time of mourning.Anytime they were confronted with their sins,they would weep and abstain from food to show their remorse:

“While Ezra was praying and confessing,weeping and throwing himself down before the house of God, a large crowd of Israelites—men, women and children—gathered around him. They too wept bitterly.”

“Then Ezra withdrew from before the house of God and went to the room of Jehohanan son of Eliashib. While he was there, he ate no food and drank no water, because he continued to mourn over the unfaithfulness of the exiles”-Ezra 10:1 and 6.

Apostle Paul and Christ talked about mourning too in the New Testament: Apostle Paul sent a letter to the Corinthian Church that grieved them and so he was happy that the letter caused them to have Godly sorrow.Godly sorrow is not repentance but it is an antecedent of true repentance. It involves feeling remorse,weeping because you err and most importantly abstaining from food to show that you value your relationship with God than food.

Christ,on the other hand,has promised a blessing for those who mourn!

So true fasting and prayers have inherent blessing in them.

e) When you encounter an impossibility: It is time to fast and pray when you face situations beyond your power.Examples of those that fasted and prayed in such cases are Esther and King Darius:

The Jews risked being annihilated and Esther was in a position to stop it but there was a limitation: Esther could not go into the King’s presence without the latter inviting her! So she decided to do this:

“Then Esther sent this reply to Mordecai: “Go, gather together all the Jews who are in Susa, and fast for me. Do not eat or drink for three days, night or day. I and my attendants will fast as you do. When this is done, I will go to the king, even though it is against the law. And if I perish, I perish”-Esther 4:15-16

What happened at the end of the 3-day fasting and prayers?

“On the third day Esther put on her royal robesand stood in the inner court of the palace, in front of the king’s hall. The king was sitting on his royal throne in the hall, facing the entrance.When he saw Queen Esther standing in the court, he was pleased with her and held out to her the gold scepter that was in his hand. So Esther approached and touched the tip of the scepter.Then the king asked, “What is it, Queen Esther? What is your request? Even up to half the kingdom, it will be given you”- Esther 5:1-3

King Darius loved Daniel but some people in his kingdom hated Daniel.They went to the King to make a law that would put Daniel into the lion’s den.By the time the king knew that Daniel was the one caught by this unchanging law of Medes and Persia,it was too late for him to save Daniel:

“When the king heard this, he was greatly distressed; he was determined to rescue Daniel and made every effort until sundown to save him”-Dan 6:14

He tried as a human but couldn’t deliver Daniel…

“Then the men went as a group to King Darius and said to him, “Remember, Your Majesty, that according to the law of the Medes and Persians no decree or edict that the king issues can be changed.”So the king gave the order, and they brought Daniel and threw him into the lions’ den. The king said to Daniel, “May your God, whom you serve continually, rescue you!”A stone was brought and placed over the mouth of the den, and the king sealed it with his own signet ring and with the rings of his nobles, so that Daniel’s situation might not be changed.”-Dan 6:15-17

Most times when we read this story,we forget to note what the king did after this incident: He fasted for Daniel though he was an heathen King!!!

“Then the king returned to his palace and spent the night without eating and without any entertainment being brought to him. And he could not sleep”-Dan 6:18

We can learn two things from here:1)Fasting can be as short as skipping a meal 2)Fasting can also be deprivation of things like entertainment and sleep.

Anyway,what was the result of both fasting by Darius and Daniel?(He too was probably fasting in the lion’s den)

“At the first light of dawn, the king got up and hurried to the lions’ den. When he came near the den, he called to Daniel in an anguished voice, “Daniel, servant of the living God, has your God, whom you serve continually, been able to rescue you from the lions?”Daniel answered, “May the king live forever!My God sent his angel, and he shut the mouths of the lions. They have not hurt me, because I was found innocent in his sight. Nor have I ever done any wrong before you, Your majesty”.The king was overjoyed and gave orders to lift Daniel out of the den. And when Daniel was lifted from the den, no wound was found on him, because he had trusted in his God”-Dan 6:19-23

I will round off the indications for fasting on Wednesday, God willing.