Holy Spirit:The seal and the earnest of our inheritance (1) 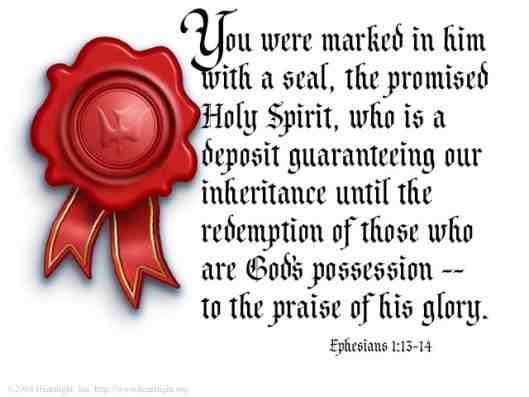 About a month ago I studied something in the Bible that I will like to share with us today.It is found in the Epistle of Paul to the Ephesian Church.

“In whom ye also trusted, after that ye heard the word of truth, the gospel of your salvation: in whom also after that ye believed, ye were sealed with that holy Spirit of promise,which is the earnest of our inheritance until the redemption of the purchased possession, unto the praise of his glory”-Ephesian 1:13-14

When were they sealed with Holy Spirit of promise?At what point did the Ephesian Church receive the earnest of their inheritance? Any Scriptural backing for this Pauline declaration? Yes! Apostle Paul was referring to an account in Acts 19:1-6!

“While Apollos was at Corinth, Paul took the road through the interior and arrived at Ephesus. There he found some disciples and asked them, “Did you receive the Holy Spirit when you believed?” They answered, “No, we have not even heard that there is a Holy Spirit.” So Paul asked, “Then what baptism did you receive?” “John’s baptism,” they replied.Paul said, “John’s baptism was a baptism of repentance. He told the people to believe in the one coming after him, that is, in Jesus.” On hearing this, they were baptized in the name of the Lord Jesus.When Paul placed his hands on them, the Holy Spirit came on them, and they spoke in tongues and prophesied.”

On that day two significant things happened to these disciples at Ephesus:

1)They were sealed with the Holy Spirit.

2)They received the earnest of their inheritance which is the Holy Spirit.

What did Paul mean by saying they “were sealed with the Holy Spirit”?

What is a seal?

Seal/sphragis/: A stamp to signify genuineness of a thing or a signet to protect something from being misappropriated or a symbol of privacy.

When something is ‘sealed’,it means it is stamped with a signet or a private mark for security or preservation purpose.

For example,the den of lion where Daniel was kept was sealed with the signet of the King:

“A stone was brought and placed over the mouth of the den, and the king sealed it with his own signet ring and with the rings of his nobles, so that Daniel’s situation might not be changed”-Daniel 6:17

Also,the tomb of Christ was sealed to prevent anyone from gaining access to it:

“So they went and made the tomb secure by putting a seal on the stone and posting the guard”-Matt 27:66

Seal was also used in commerce in many nations in the past to mark goods that had been purchased.When a person purchased goods of any kind,he marked them with his seal,in order that he might know them,and be able to claim them if they were mixed with the goods of others.

What is an earnest?

Earnest/Greek:arrhabōn/:A first payment by a buyer which confirms the bargain between him and the seller,and which is regarded as a pledge that all the price will be paid fully.It is a pledge or first installment which is part of the agreed price given in advance as security for the rest.

For us to understand the concept of earnest,we need to go back to where Apostle Paul got the idea from.

There was a transaction between Judah and Tamar.Judah wanted to have sex with Tamar.Tamar,in turn, requested for an earnest(a pledge) from him.Unknown to Judah,he was about to sleep with his daughter-in-law.Let’s read what transpired between them:

“When Judah saw her, he thought she was a prostitute, for she had covered her face.Not realizing that she was his daughter-in-law, he went over to her by the roadside and said, “Come now, let me sleep with you.” “And what will you give me to sleep with you?” she asked. “I’ll send you a young goat from my flock,” he said.“Will you give me something as a pledge/Heb:ărâbôn/ until you send it?” she asked.He said, “What pledge/Heb:ărâbôn/should I give you?”“Your seal and its cord, and the staff in your hand,” she answered. So he gave them to her and slept with her, and she became pregnant by him”-Gen 38-15-18

Why did she request for a pledge? She had been disappointed by Judah before then.

“Judah then said to his daughter-in-law Tamar, “Live as a widow in your father’s household until my son Shelah grows up”-Gen 38:11.

Judah didn’t fulfil this promise to Tamar.In fact that was the reason behind her looking for ways to have an intercourse with Judah(his father-in-law) in order to have a child in that lineage.

To achieve this,she needed to make this transaction a concrete one such that Judah wouldn’t be able to renege on the agreement.Therefore,she requested for an earnest.Judah gave her his seal/cord and staff as a first installment of a young goat he would send to her.

Three months later,Tamar became pregnant and Judah was notified but he never knew he was the one that impregnated Tamar.The following now ensued:

“About three months later Judah was told, “Your daughter-in-law Tamar is guilty of prostitution, and as a result she is now pregnant.”Judah said, “Bring her out and have her burned to death!” As she was being brought out, she sent a message to her father-in-law. “I am pregnant by the man who owns these,” she said. And she added, “See if you recognize whose seal and cord and staff these are.”Judah recognized them…”- Gen 38:24-26a

Judah gave an order to burn Tamar to death but Tamar responded by showing him the earnest(pledge) and Judah couldn’t carry out his threat because the pledge was a symbol of covenant between them.

Now that we know what a seal and an earnest are,I will continue from there on Saturday by God’s grace.