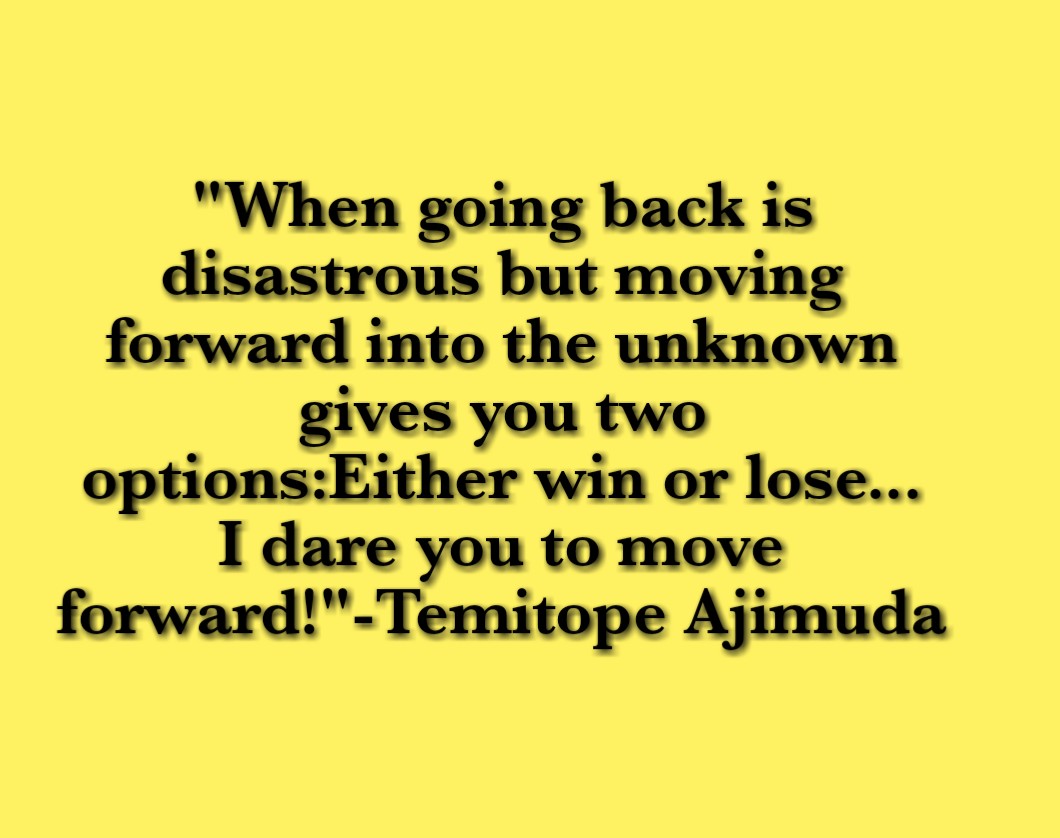 “When going back is disastrous but moving forward into the unknown gives you two options:Either win or lose…I dare you to move forward!”-Temitope Ajimuda

“When you dare to venture where you have not gone before,you will return somehow changed”-Toni Sorenson

“If I perish,I perish…If I die,I die…” is the mindset of anyone who wants to amount to something in life! Nothing ventured, nothing gained.No venture,no success.

I am here today to challenge someone who is stuck because of the fear of the unknown.I want to make you uncomfortable with that status quo.I want to dare you to take a ‘calculated risk of faith’.

I will achieve this by taking us through some examples of people in the Bible who, despite the critical situations they were in,took the bull by the horn.

Haman incited King Xerxes against the Jews and a decree was issued to annihilate them :

“Dispatches were sent by couriers to all the king’s provinces with the order to destroy, kill and annihilate all the Jews—young and old, women and children—on a single day, the thirteenth day of the twelfth month, the month of Adar, and to plunder their goods.A copy of the text of the edict was to be issued as law in every province and made known to the people of every nationality so they would be ready for that day”-Esther 3:13-14

Esther,a Jewess and the queen,was unaware of this information.The King also did not know that the death threat would not spare Esther.Therefore,Mordecai(Esther’s uncle) had to inform her about the death sentence passed on all Jews.He knew Esther could do something about this issue by talking to the King on behalf of the Jews but she felt otherwise.This was Esther’s position:

“All the king’s officials and the people of the royal provinces know that for any man or woman who approaches the king in the inner court without being summoned the king has but one law: that they be put to death unless the king extends the gold scepter to them and spares their lives. But thirty days have passed since I was called to go to the king”-Esther 4:11

How many times have you been told that you can do something and you think you can’t? People expect you to rise up to the occasion because of the position He has placed you but you have one excuse or the other to give to them.Esther was like that too until Mordecai called her bluff:

“When Esther’s words were reported to Mordecai, he sent back this answer: “Do not think that because you are in the king’s house you alone of all the Jews will escape.For if you remain silent at this time, relief and deliverance for the Jews will arise from another place, but you and your father’s family will perish. And who knows but that you have come to your royal position for such a time as this?”-Esther 4:12-14

Immediately,Esther knew there was no going back.Remaining quiet was no longer possible,if she did,she and her family would die.The threat of death ‘burnt’ her bridge of silence to ashes.

There are bridges you have to set on fire 🔥 if you want to progress in life.

Like Esther,some people need to burn the bridge of silence! They need to open their mouth and talk to God about their predicaments!They are too cold and gentle for the unction upon their heads.That attitude must be jettisoned for them to make a headway.

For some,it is the bridge of their past.They need to burn it! Your past remains in the past,you ain’t going back there.

For many, it is the bridge of sin.They have many excuses to give why they can’t do the will of God.Several people have told them they can live holy lives but they would respond with 💯 reasons why holiness is not possible.

To others,it is the bridge of inertia they need to burn.They keep talking on the same spot…No action.They stay on the mountain of the Lord complaining and grumbling like the Israelites.Meanwhile,God Himself has become uncomfortable with their stagnant position:

“When we were at Mount Sinai, the LORD our God said to us, ‘You have stayed long enough at this mountain.”-Deut 1:6

Come on!!!You have stayed on the same spot for too long!!!Leave that spot and venture into the unfamiliar!!!

Esther,unwilling to go back to her gentle,quiet, unassuming and reticent personality, had two options before her:Either to die by breaking the palace protocol or live.She preferred to die!

“Go, gather together all the Jews who are in Susa, and fast for me. Do not eat or drink for three days, night or day. I and my attendants will fast as you do. When this is done, I will go to the king, even though it is against the law. And if I perish, I perish.” Esther 4:16

I decide to write this post because I notice there are many people that desire success but are not ready to go through the pains 😣 of success.When you are willing to die for what you believe in,success is inevitable.When I got this Rhema,I became very passionate with my dream and aspiration.I am not telling you theory,it is something I practise and I can tell you that it works.

Please let it be noted that Esther didn’t just move forward without a strong backing.This is where many people miss out on this kind of teaching.Don’t make this type of move without God’s backing.Read what Esther said:”Do not eat or drink for three days, night or day. I and my attendants will fast as you do.” This tells you that she committed this risky venture into God’s hands before she embarked on such ‘suicide’ mission.

When was the last time you committed your plans into God’s hand with prayer and fasting? It is when some people fail they will remember God and start grumbling.Your impulsiveness is your problem.You are excited about your dream but you forget that achieving that dream is a risky venture and you need God’s help.Don’t jump out of the aircraft without wearing the parachutes!Be strong in the Lord by putting on the full armour of God before you embark on such venture.

Esther said ‘if I perish,I perish’ in faith knowing that if she committed her desire into God’s hands,she would live.

“The king was sitting on his royal throne in the hall, facing the entrance. When he saw Queen Esther standing in the court, he was pleased with her and held out to her the gold scepter that was in his hand. So Esther approached and touched the tip of the scepter.Then the king asked, “What is it, Queen Esther? What is your request? Even up to half the kingdom, it will be given you”-Esther 5:1b-3.

How many people want to dare to move closer to God and achieve their dreams? You must be willing to face your greatest fear in life! King Xerxes was the greatest fear of Esther! What is your own?

Is death your greatest fear? Face it today with this word:

Are you afraid of failure? You only fail 😢 when you don’t try again! So don’t give up,you can succeed.How?

“…For the LORD your God will personally go ahead of you. He will neither fail you nor abandon you”-Deut 31:6

“For God has said, “I will never fail you. I will never abandon you.So we can say with confidence, “The LORD is my helper, so I will have no fear.  -Heb 13:5b-6

Is the medical report of that sickness your fear? Spread it before God:

“In those days Hezekiah became ill and was at the point of death. The prophet Isaiah son of Amoz went to him and said, This is what the Lord says: Put your house in order, because you are going to die; you will not recover.”Hezekiah turned his face to the wall and prayed to the Lord…”-2Kings 20:1-2

Is God your greatest fear? Are you afraid to face God because of your past sins.Come to Him the way you are:

“Let us then with confidence draw near to the throne of grace, that we may receive mercy and find grace to help in time of need”-Heb 4:16

This is just the introduction.More to come on Saturday…