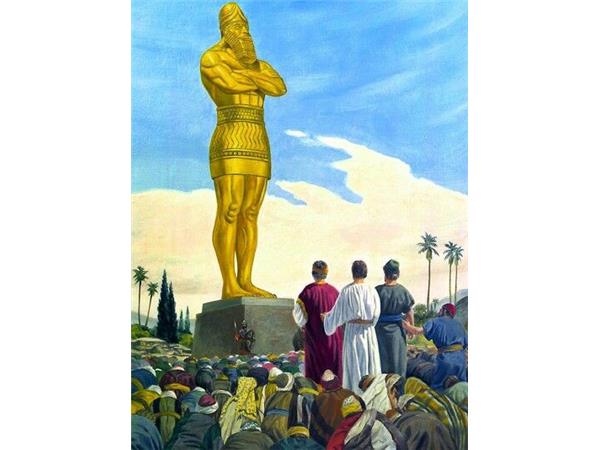 In the last post on Wednesday,we saw how Esther picked up the gauntlet by going to meet the King uninvited! She posited: “If I perish…I perish”.In the long run,she succeeded.

Today,we shall be looking at another example from the Bible:

Just like the Jews in the Book of Esther risked being exterminated,another set of Jews was in trouble in Babylon when King Nebuchadnezzar set up a golden image with a strict instruction:

I want us to learn two principles today from this story in the Book of Daniel chapter 3:

1)Every decision you make have consequences and you must be ready to face them:

The three Hebrew men had already purposed in their minds not to bow down to the image set up by the King and they were ready to face the consequence of their decision:

“Shadrach, Meshach and Abednego replied to him, “King Nebuchadnezzar, we do not need to defend ourselves before you in this matter.If we are thrown into the blazing furnace, the God we serve is able to deliver us from it, and he will deliver us from Your Majesty’s hand.”-Dan 3:16;17

If you decide to follow Christ,such decision comes with consequences.The world and the devil won’t handle your decision with kid’s gloves.They would come for your jugular.Also,if you decide to succeed in life….Ah ah ah…You must get ready for the anti-success forces.They won’t encourage you at all ! You had better count the cost and be ready to follow the process through.Sit down first and ask yourself if you are willing to go through the fire 🔥.

“Suppose one of you wants to build a tower. Won’t you first sit down and estimate the cost to see if you have enough money to complete it? For if you lay the foundation and are not able to finish it, everyone who sees it will ridicule you, saying, ‘This person began to build and wasn’t able to finish”-Luke 14:28

2)Going away from Christ or chickening out of your dream because of fear of the unknown/future could be dangerous:

“Nebuchadnezzar said to them…if you are ready to fall down and worship the image I made, very good. But if you do not worship it, you will be thrown immediately into a blazing furnace…”-Dan 3:14-15

When I was studying this chapter,there was something that bothered me.I wanted to know if truly Nebuchadnezar would have done what he said if those men had bowed down to the image.I was not there when He made that promise so I asked the Holy Spirit this question:

“What would have happened to the three Hebrew men if they had bowed down for the image when the King gave them the second chance?”

The answer I got was a shocker!I was spellbound:

The Holy Spirit said,”The King would have still thrown them inside the furnace and they would have been roasted like chicken”!!!

He asked me to check up three things from the Book of Daniel to confirm what He said:

a)The instruction of the King:

“Whoever does not fall down and worship will immediately be thrown into a blazing furnace.”Dan 3:6

The 3 men had already violated the law stated above at that point in time.The law says they should be thrown inside the fire immediately!The law didn’t give a second chance for anybody.

b)The law of the king of Persia and Media:

“Your Majesty, issue the decree and put it in writing so that it cannot be altered—in accordance with the law of the Medes and Persians, which cannot be repealed.”-Dan 6:8

Whatever laws the kings of Media and Persia made then could not be subjected to any repeal:”Whatever is written,is written”. It was final.Nebuchadnezzar could not have said :”Now that you have bowed down,you can go home”.That would have set a wrong precedent for the citizens because they would have started disobeying the King.It was to that end that the nobles advised King Xerxes to replace Queen Vashti in the Book of Esther:

“For the queen’s conduct will become known to all the women, and so they will despise their husbands and say, ‘King Xerxes commanded Queen Vashti to be brought before him, but she would not come.’ This very day the Persian and Median women of the nobility who have heard about the queen’s conduct will respond to all the king’s nobles in the same way. There will be no end of disrespect and discord”-Esther 1:17-18

So it then follows that if the three Hebrew men had decided to bow down after they were reported,the King would not have allowed them to go without being thrown inside the fire according to the law.If he did so,it would have resulted into disrespect to his subsequent orders.

c)The motives of the astrologers that reported them to the King:

Let’s assume the two points above were possible,those three Hebrew men couldn’t have escaped the venomous spirits of these astrologers.

“At this time some astrologers came forward and denounced the Jews. They said to King Nebuchadnezzar, “May the king live forever! Your Majesty has issued a decree… But there are some Jews whom you have set over the affairs of the province of Babylon—Shadrach, Meshach and Abednego—who pay no attention to you, Your Majesty. They neither serve your gods nor worship the image of gold you have set up”-Dan 3:8-12

The devil had always wanted to annihilate the Jews because he knew the Son of God would come from amongst them.He kept using different people to achieve that.We saw what Haman wanted to do last Wednesday,these astrologers too were on the same mission.The same devil instigated Herod to kill many children when Christ was born.On a good day,these three Hebrews were goners if they had bowed to the image.The astrologers would have prevailed on the King to do what he promised to those that disobeyed him.

Therefore,with the three points above,the Holy Spirit convinced me that it would have been disastrous for these men to bow down to the image after they had been reported to the King.If the Jews had thought that bowing down was the way to save their lives,they would have been roasted inside that furnace of fire🔥 without God’s help.

Jesus corroborated that when He said:

There is a lady reading this post now.You gave your life to Christ of recent.In your place of work,your boss has been making life difficult for you because you won’t allow him have sex with you.Deep within you,this is your thought:”All these problems I am facing wouldn’t have surfaced if I had not given my life to Christ.Maybe I should just change my stand on this issue and get out of all these difficulties”.

Sister!!! If you allow him,that is when you will see the Nebuchadnezzar in him! Your problems would become multiplied and you would lose your testimony in the end.But if you resist him,you will see that God will show up for you very soon in the fire!

Brethren,irrespective of the threat,don’t give up on Christ or your vision.It is dangerous to look back after you have laid your hands on the plow! If the three Hebrew men had thought that bowing down to the image was the easy way out,they would have lost the backing of Yahweh and would still have been thrown into the fire without getting any help from God.

Were they thrown into the fire? Did they perish inside the fire?Did God show up for them?These and many more questions will be answered tomorrow morning.