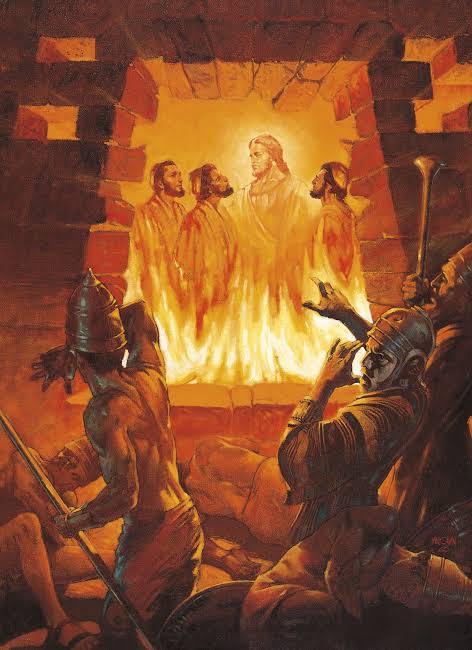 “If I perish,I perish” is not an expression of despondency.Rather,it is an affirmation of faith in the sovereignty of God.The three Hebrew men knew that God could save them but they also understood that God could allow them to be burnt in the fire if He wished!Either way,they wouldn’t not trade their God with any golden image.

NB:Fire 🔥 as used in today’s teaching represents (a)anything that you are going through that is against your wish (b)something you never planned for that is ‘eating’ you up (c) sickness/disaster that hits you suddenly(d) trials of your faith (e) limitations of any kind.

“Then Nebuchadnezzar was furious with Shadrach, Meshach and Abednego, and his attitude toward them changed. He ordered the furnace heated seven times hotter than usual”-Dan 3:19

If you understand this principle very well,you won’t give up when the fire becomes hotter!When the furnace becomes extremely hot,men/women of faith know that their breakthrough is at the corner.A weakling might throw in the towel at this level but a champion will not because he/she knows the essence of the ‘fire’: It purifies the silver.If the silver must come out refined,it must go through the intense fire.

“For You have tried us, O God; You have refined us as silver is refined”-Psalm 66:10

“Dear brothers and sisters, when troubles of any kind come your way, consider it an opportunity for great joy.For you know that when your faith is tested, your endurance has a chance to grow.So let it grow, for when your endurance is fully developed, you will be perfect and complete, needing nothing”-James 1:2-4

So tell the Devil that is stoking the fire :”Bring it on!”

2)If they had known that the fire would make you a living sacrifice,they would not have thrown you inside:

“He commanded some of the strongest soldiers in his army to tie up Shadrach, Meshach and Abednego and throw them into the blazing furnace”-Dan 3:20

Therefore,Shadrach,Meshak and Abednego could be seen as a type or shadow of “living sacrifices” taught by Apostle Paul:

“Therefore, I urge you, brothers and sisters, in view of God’s mercy, to offer your bodies as a living sacrifice, holy and pleasing to God–this is your true and proper worship”-Romans 12:1

The devil might have thought this fire will burn you to ashes but something deep is happening within you now.In the midst of all these afflictions,you are worshipping God and the devil and his angels are dumbfounded!Your bodies have been offered to God as living sacrifices.The sweet aroma that comes out of your body as a result of the fire is winning souls into the Kingdom of God.Halleluyah!!!

‘But the rulers of this world have not understood it; if they had, they would not have crucified our glorious Lord’-1Cor 2:8

If they had known too,they wouldn’t have thrown you into the fire.

“Then King Nebuchadnezzar leaped to his feet in amazement and asked his advisers, “Weren’t there three men that we tied up and threw into the fire?”They replied, “Certainly, Your Majesty.”

He said, “Look! I see four men walking around in the fire, unbound and unharmed, and the fourth looks like a son of the gods”-Dan 3:24-25

The fire was burning Shadrach,Meshak and Abednego but they were not consumed by the fire! This was because God was with them inside the fire:

“…When you walk through the fire, you will not be burned; the flames will not set you ablaze”-Isa 43:2b

When you are inside the fire,how will you know that God is with you?

Answer:When you are not burnt even though you are burning!

Apostle Paul gave us the New Testament version of the above pictures here:

“We often suffer, but we are never crushed. Even when we don’t know what to do, we never give up.In times of trouble, God is with us, and when we are knocked down, we get up again“-2Cor 4:8-9 CEV

The only possible explanation for this is that the presence of God is right there with us in the fire.

4)The fire🔥 you are in now can only burn for a while,it is not hell fire that burns forever:

Please kindly go ahead and pray in the Spirit before you continue.Command your body,soul and spirit to get out of the fire now.Enough is enough!

5) Instead of perishing in the fire,you will be promoted if you trust in God:

“Nebuchadnezzar said, “Praise be to the God of Shadrach, Meshach and Abednego, who has sent his angel and rescued his servants! They trusted in him and defied the king’s command and were willing to give up their lives rather than serve or worship any god except their own God“-Dan 3:28

“Then the king promoted Shadrach, Meshach and Abednego in the province of Babylon”-Dan 3:30(last verse of the chapter)

Shadrach,Meshak and Abednego didn’t mind if they perished in the fire but they ended up being promoted instead.If you will trust God absolutely, you are the next person to be promoted in Jesus’ name.Amen.

God willing,a new topic will hit the internet on Wednesday on this blog.