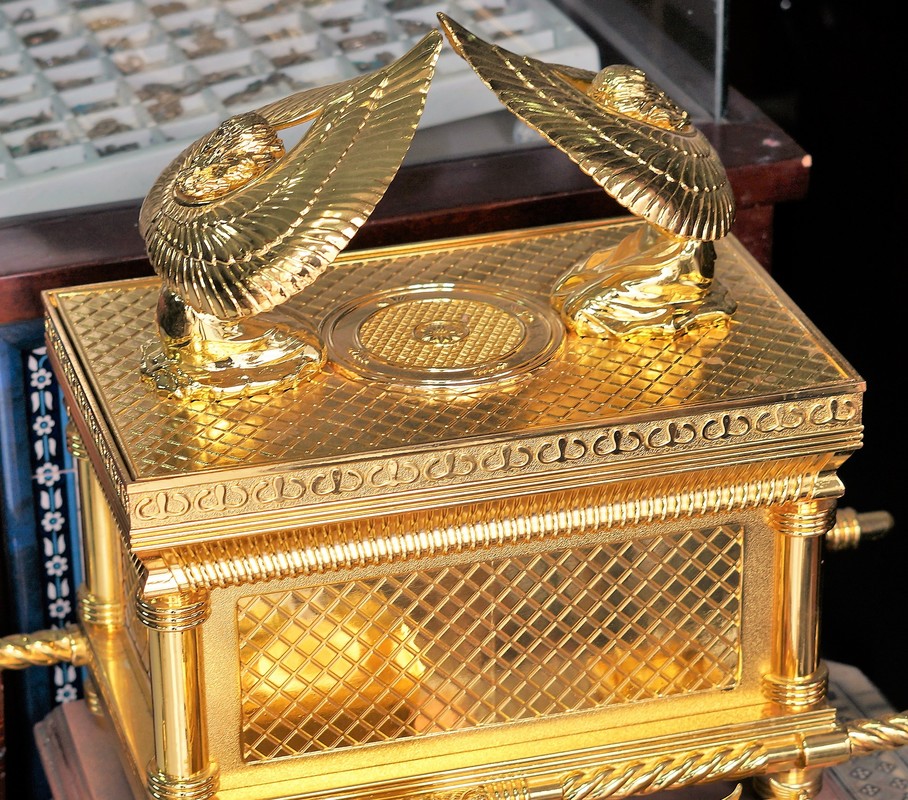 Reading the Old Testament especially the Pentateuch could give an idea of a God who is very strict and judgemental.That is not true.God by default is a merciful God.That is His nature.In the midst of all His Laws,commandments and ‘strictness’,He told Moses to make the mercy seat which was the lid or cover of the ark of covenant and promised to commune with him from there.

“You shall make a mercy seat of pure gold; two and a half cubits shall be its length and a cubit and a half its width.”

NB:What were the things inside the Ark? The two tablets on which the Ten commandments were inscribed,the manna they ate in the wilderness and Aaron’s rod that budded.The ark of covenant was covered with the mercy seat.

A high priest would come into the Holy of Holies where the above ark was placed to sprinkle blood on the mercy seat once a year on a special day called the day of Atonement:

Let me draw out three points from the above discussion:

1)The mercy seat was a lid that covered the ever-condemning and ever-judging Laws inside the Ark of covenant.If there was no mercy seat,the Law would be face to face with God anytime He came down and the people of God would be subjected to the curses and wrath of the Law.

3)God used to come down in the cloud above the mercy seat on the day of Atonement after the sprinkling of the blood to dispense mercy over judgement once a year.The sprinkled blood made God’s wrath to be withheld from the worshippers.

Let me expatiate on some key words I have used so far:

MERCY SEAT /Greek:hilastērion/:Which means the lid of the Ark or the place for propitiation.We already know what a lid is.What is the meaning of propitiation?

PROPITIATION/Greek:hilastērion/:To propitiate means to appease or to regain someone’s favour or make up for something you did wrong.The process of doing this is either called propitiation or atonement.

ATONEMENT:Predominantly an old testament word.It was only used once in the New Testament directly.So I will give both Hebrew and Greek words for it:

Atonement:Hebrew:/kippûr/: It is the act of making amends or reparation for wrongdoing which also means propitiation.

Ok…Enough of semantics!Let’s see how these words are used one after the other in the New Testament:

“And above it were the cherubim of glory overshadowing the mercy seat/hilastērion/”-Heb 9:5

“For all have sinned and fall short of the glory of God and being justified freely by His grace through the redemption that is in Christ Jesus, whom God set forth as a propitiation/hilastērion/ by His blood, through faith, to demonstrate His righteousness, because in His forbearance God had passed over the sins that were previously committed”-Romans 3:24-25

“And not only so, but we also joy in God through our Lord Jesus Christ, by whom we have now received the atonement/katallagē/”-Romans 5:11

Let me now relate the New Testament realities with the three points I raised earlier on about the earthly Tabernacle:

1)In the New Testament,Jesus Christ is now our mercy seat! He is the hilastērion ,the kippûr and our katallagē.Halleluyah!!! However, Jesus Christ didn’t cover our sins,He actually wiped them away as if we didn’t commit them! If you truly confess your sins to God,you are forgiven and God relates with you as if such sins were never committed by you.The sins have been wiped away by Christ’s blood.

2)What gives us this privilege was the shedding of the blood of Christ.Without this,we were objects of His wrath:

“God, in his grace, freely makes us right in his sight. He did this through Christ Jesus when he freed us from the penalty for our sins”-Romans 3:24

3)Our High Priest entered the Holy of Holies once and sprinkled his blood on the mercy seat!When did Christ do this?

I want you to compare the positions of the cherubim on the mercy seat and what Mary Magdalene saw when she went to the tomb of Christ:

“Now Mary stood outside the tomb crying. As she wept, she bent over to look into the tomb and saw two angels in white, seated where Jesus’ body had been, one at the head and the other at the foot.At this, she turned around and saw Jesus standing there, but she did not realize that it was Jesus.-John 20:11-12,14

Any similarity between the two instances? I leave you to your imagination!

What took place spiritually that Mary Magdalene didn’t see is written in the Book of Hebrews:

“But Christ came as High Priest of the good things to come, with the greater and more perfect tabernacle not made with hands, that is, not of this creation. Not with the blood of goats and calves, but with His own blood He entered the Most Holy Place once for all having obtained eternal redemption”-Heb 9:11-12

“And as it is appointed for men to die once, but after this the judgment,so Christ was offered once to bear the sins of many”-Heb 9:27-28a

We all sinned and died in Adam awaiting judgement but Christ was offered to appease God for our wrongdoing.He became our propitiation.He satisfied the righteous requirements of the Law by dying.As a result of this,the wrath of God was withheld from us and we were reconciled back to God.

His mercy prevailed over the judgement that we should have suffered.

What a blessing to be a child of God!

Are you a child of God.If you are not,come as you are to Him.Confess your sins to Him.His blood will make you clean and His mercy will prevail over the judgement that you should have received.