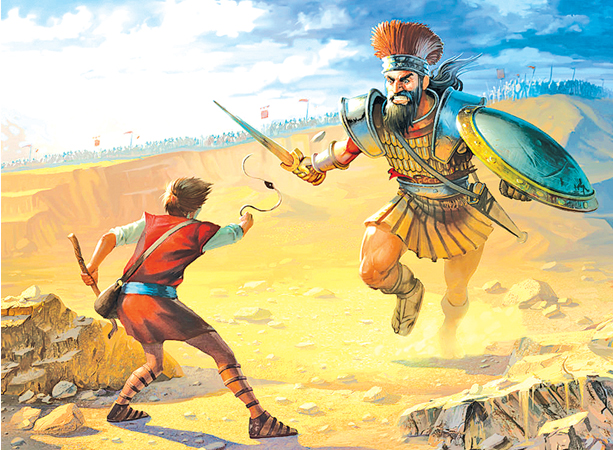 Do you know that the Bible didn’t say that God instructed David to put off Saul’s garment? David made that decision himself!

“I cannot go in these,” he said to Saul, “because I am not used to them.” So he took them off.

David didn’t say God told me to remove the garment.”I cannot because I am not used to them” was the summary of David’s response because he knew how God used to work with him in the past.Let’s check it out:

“But David said to Saul, “Your servant has been keeping his father’s sheep. When a lion or a bear came and carried off a sheep from the flock, I went after it, struck it and rescued the sheep from its mouth. When it turned on me, I seized it by its hair, struck it and killed it“-1Samuel 17:34-35

Can you imagine what David used to do? Ideally if a lion snatched a sheep,many shepherds would allow it go with the sheep and protect others against its attack.David’s case was different.He would not only run after the lion,he would strike it and snatch the sheep alive from the lion! Please who does that? Rescue a sheep from a lion 🦁 ?That tells us something: He used to run after the lion with speed.Lions’ teeth are not as gentle as not to have killed the sheep in a minute.But because David used to respond almost immediately,he would still be able to rescue it alive.As if that was not enough,when the lion turned on him,he would grab its hair,strike it and kill it!

Why did I go through the details of this story: I wanted to point your attention to the fact that David’s mode of response to such external attack was very fast.The way God worked with him required him to be swift.In other words,if he had gone to the battle with an armour that prevented him from running fast,very likely he would have partially lost the battle! How did I know? Let’s look at the lion’s story again.If he had waited for like 3 minutes before he responded to the lion’s attack,what would have happened to the sheep? Of course,the lion would have killed the sheep.Even though he might later overpower the lion,he would have lost the sheep.

“Your servant has killed both the lion and the bear; this uncircumcised Philistine will be like one of them…”-1Sam 17:36

If Goliath was going to be like the lion or the bear that David killed,what should be David’s approach to the attack? He needed to act speedily of course.If he had gone to face Goliath with heavy garment,he wouldn’t have been able to run and maybe Goliath would have attacked him first and inflicted some injuries on David.On the contrary,David attacked him first because he was able to run fast.

Now you know it was sensible for David to put off Saul’s garment.He didn’t need to first go for prayer meetings to know God’s will for him!He didn’t ask the priest to consult the Urim and Thumim on his behalf to know what God was saying about Saul’s garment.He just knew by instinct that the garment didn’t fit his personality and mode of operation.

This is where I have a challenge: Many people expect God to specifically tell them to put off certain things when they know deep in their minds that those things slow them down,kill their creativity,and do not give them satisfaction.Yet,they want God to drum it into their heads in audible voice: “My son,leave that relationship”, “That sin will kill you,leave it”, “That job is no longer fruitful,go and start your own”.

Not only that,they now put God in a tight corner by telling God to use a method he had never used to communicate His mind to them before:”God if she is your will for me,let her wear heels today”, “God if he is your will for my life,let me see him in my dream tonight”,”If God wants me to leave that sin,I want my Pastor to preach about it today”.Are those the ways God has been talking to you before? Why are you tempting God with your fleeces when you know the stand of God on all these issues?Do you still need God to tell you that this Saul’s garment is oversized and too heavy for you? Put it off!!!

“Therefore, since we are surrounded by such a great cloud of witnesses, let us throw off everything that hinders and the sin that so easily entangles. And let us run with perseverance the race marked out for us”-Heb 12:1

“Throw off your old sinful nature and your former way of life, which is corrupted by lust and deception”-Ephe 4:22

Throw off everything that will not make you run very fast to ‘kill’ your Goliath.You know those things:Throw them off!

You know that this relationship 💔 of yours has sapped all your energy and rendered you stagnant and hopeless: You are not yet married,you are already depressed and being sexually abused.Do you want to face life’s challenges in that state of mind? You know you have some dirty habits that don’t allow you to be bold in place of prayers and yet you are unwilling to take them off. I challenge you to take that Saul’s garment off today.David did that and you can do it too.

You will be glad you did because I can see you victorious over your ‘Goliath’!