No word from God will ever fail 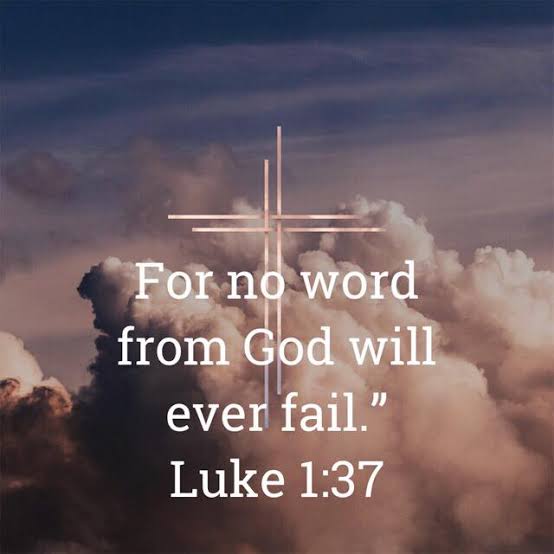 One of the hallmarks of an excellent personal assistant is knowing his CEO very well.He is familiar with his boss’s job descriptions,both those on paper and the unwritten ones.This becomes very important when he relates with outsiders that need to get information about his boss.In addition to this,the longer the PA has stayed with the CEO,the better he knows certain idiosyncrasies about him.

Angels in heaven are like God’s PA!They stay in God’s presence and take orders from Him.They know their CEO very well. They have been in this job for ages.They have delivered many messages on God’s behalf to countless numbers of people.

Over time,they have noticed a consistency in the integrity of God’s word.God has never sent them an errand to deliver a message and then renege on it.This fact,they know very well.

One day,God summoned Angel Gabriel and gave him two assignments:

1)To tell a man whose wife was too old to conceive that his wife will become pregnant.

2)To inform a virgin that she will become pregnant without having sexual intercourse with a man.

Angel Gabriel had handled similar tasks before so he didn’t have to question God whether He meant what He said or not.He knew His boss more than that.However,he had problems convincing those people he was sent to.

Zechariah and Mary who the Angel was sent to were living in a different world.They lived in a world ruled by natural laws.Unlike God and the angel that live in a timeless zone,Mr Zechariah and Miss Mary lived in a terrain that was time bound.So it was difficult for their natural minds to accept the supernatural instructions.

Turn your Bibles to the book of Luke Chapter 1:

“Then an angel of the Lord appeared to him, standing at the right side of the altar of incense.When Zechariah saw him, he was startled and was gripped with fear.But the angel said to him: “Do not be afraid, Zechariah; your prayer has been heard. Your wife Elizabeth will bear you a son, and you are to call him John“vs 11-13

Here I got to know that Angel Gabriel was sent as a result of the petition Zechariah sent to Heaven.He prayed to have a son despite his old age.But he never took the prayers serious.To him,his prayers were routinely done and offered to fulfill all righteousness:No expectations.

Have you been in that situation before?

I could relate to Zechariah’s reasoning.I was taught how to pray when I was younger.With time,I learnt it by heart.So anytime I was asked to pray,I could do that effortlessly because I knew what to say.To me,prayer was a routine task.I never knew that it didn’t matter whether you saw prayer as a routine or not:God hears all our prayers!

“Zechariah asked the angel, “How can I be sure of this? I am an old man and my wife is well along in years” vs 18

Zechariah lived in a world where ‘there is time for everything’.He and his wife were already out of the time set for conception.So if someone was telling him that the rule would be suspended for him and his wife,I think he had the right to ask question!

“The angel said to him, “I am Gabriel. I stand in the presence of God, and I have been sent to speak to you and to tell you this good news”-vs 19

It was a personal assistant to God that was talking to Zechariah! Someone who stands in the presence of God.He knows the ways of God.He knows His power and influence.He is aware that for every message He has been sent to deliver yesterday,today and tomorrow,none has gone without fulfilment.

How did I know? Let’s see what the Angel discussed with Mary:

“In the sixth month of Elizabeth’s pregnancy, God sent the angel Gabriel to Nazareth, a town in Galilee,to a virgin pledged to be married to a man named Joseph, a descendant of David. The virgin’s name was Mary” vs 26-28

Before Dr Luke would write about Mary’s case,he quickly reminded us that Zechariah’s wife was already 6months pregnant! Has God’s word failed? No! Now to Mary’s story:

As humans,we always assume our situation is unique and more difficult than other people’s trouble.So a virgin who has never slept with a man somehow believes it is still possible for a post-menopausal woman who has sex with her husband to conceive than she who has never slept with a man.Such thoughts are not from God.They come from either our flesh or from the devil.

The Angel had to convince Mary:

“For with God nothing will be impossible”(NKJV)

Angel Gabriel had spent enough time with His boss to know that none of His word has ever failed.It is something that is known by every being in Heaven.God’s words don’t fail.The Angels know this.Even Jesus,the Son of God also repeated the same thing:

“Jesus looked at them intently and said, “Humanly speaking, it is impossible.But with God everything is possible”-Matt 19:26

It doesn’t matter your situation:Whether it is too late like Zechariah’s case or too early like Mary’s case.What matters is the word of God concerning your case.

If He says you will conceive…His words will come to pass.

If He says you are going to be healed…His words won’t fail.

Whatever He says…It shall come to pass.

“Launch out into the deep”