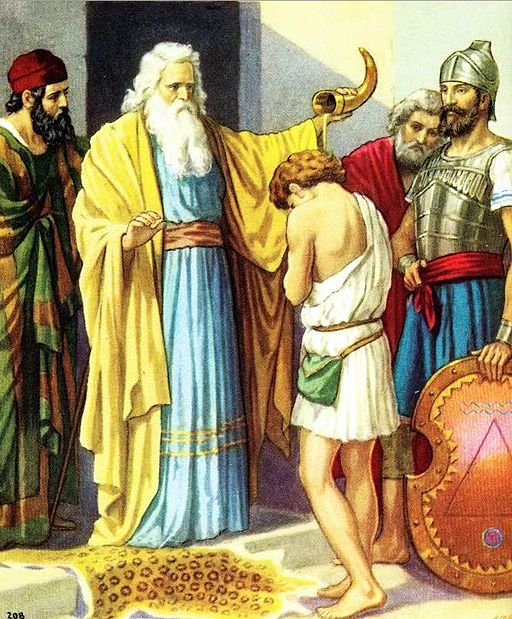 God ordered Prophet Samuel to go and anoint David who was around 9-15 years old then as the king of Israel while King Saul was alive and still on the throne!That was a tall order.

“The Lord said to Samuel, “How long will you mourn for Saul, since I have rejected him as king over Israel? Fill your horn with oil and be on your way; I am sending you to Jesse of Bethlehem. I have chosen one of his sons to be king”-1Samuel 16:1

What would you do if you were in Samuel’s shoe? Many of us today would have started tweeting such kind of sensitive information:

‘I am on my way to anoint the next king of Israel’.

Within seconds,the tweet would have gone viral.Saul would get to know and that would have been disastrous for both Samuel and the young David.

Samuel knew the implications of all these, therefore,he told God his fears and reservations:

Prophet Samuel…I mean the famous Prophet Samuel was afraid Saul could kill him!His fear was tenable of course.Saul would have killed him if he got to know.

That you are sent by God to deliver a message to some people doesn’t me you should not be discreet while going about the delivery of the message:Wisdom is profitable to direct.

God had to teach Samuel what to do:

“The Lord said,“Take a heifer with you and say, ‘I have come to sacrifice to the Lord.’ Invite Jesse to the sacrifice,and I will show you what to do. You are to anoint for me the one I indicate”-1 Samuel 2:2b-3

In other words,tell those that might suspect you have something up your sleeve that you are there to offer sacrifice to me.

Was God teaching Samuel to lie? No! That is DISCRETION!

Christmas is around the corner!!!So,let’s read the story of the Wise men(the Magi):

“After Jesus was born in Bethlehem in Judea, during the time of King Herod, Magi from the east came to Jerusalem and asked, “Where is the one who has been born king of the Jews? We saw his star when it rose and have come to worship him.”When King Herod heard this he was disturbed, and all Jerusalem with him”-Matt 2:1-3

The wise men received a very sensitive information that a King had just been born.Meanwhile,King Herod was still on the throne.Can you see the similarity between this and that of Samuel vs Saul story? Yeah, quiet similar.

Unlike Samuel,the wise men were not wise in regards to this story.They saw the unique star and knew its interpretation.However,how could they have thought King Herod would be happy with the fact that another king was coming to take his throne?The mishandling of that information,though it fulfilled certain prophecies,caused the death of many children under 2 years of age!

“When Herod realized that he had been outwitted by the Magi, he was furious, and he gave orders to kill all the boys in Bethlehem and its vicinity who were two years old and under, in accordance with the time he had learned from the Magi”-Matt 2:16

I am sure those families would not be happy that the birth of a new king was heralded with the death of their children.It was a painful but an avoidable calamity.

One of the hallmarks of a good leader is his/her ability to be discreet with information.Without it, he/she might suffer serious harm or endanger the lives of others.

Without Samuel’s discretion,who knows what would have happened to David before he was anointed?Maybe Saul might have even sent a killer squad to him where he was tending the sheep before Samuel could anoint him.

“A prudent person foresees danger and takes precautions.The simpleton goes blindly on and suffers the consequences”-Prov 22:3