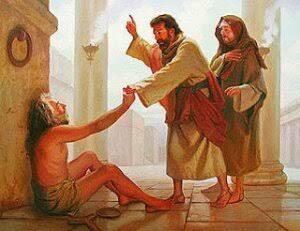 “He has made everything beautiful in His own time”. Eccl. 3v11.
One can be in the most beautiful place but such person’s life may not be beautiful. If you doubt me
then let us check on someone who actually was always seen somewhere called Beautiful gate but whose life was not beautiful.
Act 3:2: “And a certain man lame from his mother’s womb was carried, whom they laid daily at the gate of the temple which is called Beautiful,…
Hummmm, do you know it doesn’t matter  how big the church you attend is,how beautifully decorated it might look or how large the congregation might be,if you do not have the Beautifier in your life you will just be there  accepting whatever comes your way including things that are meant for ‘dogs'(crumps).
Hey! Are you in the church because they provide job opportunities and welfare packages huh? Are you there to strategically position yourself to see many men/women for possible marriage? That lame man had similar purpose in mind:
vs 2b &3...’to ask alms from those who entered the temple; who, seeing Peter and John about to go into the temple, asked for alms‘. He might have thought in his heart :”if I sit at the market place I may not get as much sympathy and help as I will get while sitting at the temple.People at the temple will feel compelled to help me than the people at the market place.” In fact he might have even gotten information from his carriers that the temple is the best place to ask for alms.But all the small small help(alms) he was getting couldn’t help him until he met the greatest Helper and Beautifier.
It is not a bad thing to be helped by the  church  but I am so sorry to say that you have not gotten the right help .You have not really discovered what you need. Yes you have food on your table now, you are already  in courtship in short about to wed , oh now you have baby but have you met the greatest Helper?: “I am the way and the truth and the life.No one comes to the Father except through me.”John 14:6.You might remain outside the beautiful gate without knowing Christ!
To the church(those inside the temple already),do you care  about the salvation of those at the gate? As long as they show up in all church programs we assume  they are saved. That wasn’t what Jesus taught  us. Or have you forgotten? Let me remind you, Luke 5v3-11. It is the story of how  Simeon Peter toiled all night and Jesus came to his aid, he launched his net into the deep and his net broke, he even called on his neighbours to help him out. But before then, Peter already recognized who Jesus was in v5 he acknowledged him as Master. After the miracle of catching so many fishes Jesus did not ‘catch’ only Simeon,he ‘caught’ his partners too-James and John, the sons of Zebedee, who were partners with Simeon.Then something happened that struck me in v 11:’So when they had brought their boats to land, they forsook all and followed Him’.
… they forsook all and followed him? Hahahaha… Can you just imagine that? What they toiled all night to get and couldn’t get now they got it but they had to leave all behind to follow him.That is exactly what happens when you have Christ nothing of this world matters to you because you have the Helper. Remember in v3 it was Simeon Peter’s boat Jesus sat in but not only Peter followed him that day.It means your miracle and healing gifts are not there just for fun but rather to bring people into the kingdom of God. Remember it is that same Peter that now healed the lame man at the Beautiful gate. “Then Peter said, “Silver and gold I do not have, but what I do have I give you: In the name of Jesus Christ of Nazareth, rise up and walk.” So he, leaping up, stood and walked and entered the temple with them—walking, leaping, and praising God”
We have so many of these lame men at the gate of our churches today.They don’t know the depth of Christ at all.They do not know that if the gate of the temple can be that beautiful how then will the inner part of the temple look like ? They are already complacent with the little they get from the gate- healing,promotion etc while there is more to get in the inner part(sanctification,glorification,discipleship etc).
They won’t know if we do not Preach the truth.Preach the truth,give out the meat to the people under you to make them grow! Enough of milk! Enough of talking about the ‘gift’ without letting them know the ‘Giver’! Enough of dishing out the silver,dollars,nairas etc without showing them Christ.
Who goes to the market and first ask for bonus or extra before asking for the good itself? You usually buy your goods first then ask for possible bonus.
“Seek first the kingdom of God and it’s righteousness and every other things will be added unto you.”-Matt 6:33
If you are yet to know Christ personally ,kindly say this prayer :
“Lord Jesus, now I know you as the only helper and Beautifier.I am so sorry for running after earthly things instead of knowing you first. Forgive me and take me as your child. I surrender all to you.Be my personal Lord and Savior in Jesus’ name”.Amen.
This piece was written and sent to Rhemablog by Evelyn Ajimuda,a Foreign Language student of Obafemi Awolowo University.She loves writing, travelling, counselling, reading,cooking and meeting new people.Her passion is to help people know the person of Christ and to make an indelible impact wherever she finds herself.