HONORIFIC TITLES AND PROMOTIONS IN THE CHURCH 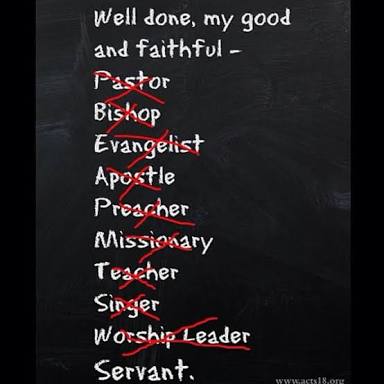 These days promotions and titles are trending topics among church members and leaders  in various capacities.What is the mind of God about these?

There are two types of promotion: Earthly and Divine promotion.

Earthly promotion is about moving from lower cadre to higher cadre.It is moving from being a Junior to a Senior officer. It is always an upward movement.

Satan was the first being to desire such promotion.He wanted to scheme God out of heaven but God hauled him down from Heaven to the earth:

“I will ascend to the heavens; I will raise my throne above the stars of God; I will sit enthroned on the mount of assembly…

It is therefore,a downward movement first,and if found worthy,the person now moves up or  gets promoted.

Jesus Christ was an epitome of this:

In your relationships with one another, have the same mindset as Christ Jesus:

Who, being in very nature God, did not consider equality with God something to be used to his own advantage;
rather, he made himself nothing by taking the very nature of a servant, being made in human likeness.
And being found in appearance as a man, he humbled himself by becoming obedient to death— even death on a cross!
Therefore God exalted him to the highest place and gave him the name that is above every name-Phil 2:5-9

He took the path of humility before He was exalted.

Man looks at your external appearance,your diction ,eloquence,charisma,obedience to doctrines etc before you are promoted.But God only looks for a humble heart.That is the way God promotes.

There are two issues I want to address before I continue:

1)Please and please,God does not promote someone from being a Teacher of God’s word to becoming a Pastor! No no no. If you are called to be a Teacher,then you are a Teacher,stay in the teaching line.God knows how to promote you in that Teaching ministry.You don’t need promotion to become a Pastor before you can be effective.

If you are an Evangelist,operate within the ambit of your calling.You are not in any way inferior to a Pastor or an Apostle.Also,don’t start looking for a ‘promotion’ to become a Prophet! Hahahaha.

These offices are areas of specializations already.

2)The hierarchical administrative structure now in vogue in the church is a pattern copied from the secular setting.It is not necessarily divine!

For instance,you are promoted from being a Pastor to a Senior Pastor then after a while you become a Bishop.After that an ArchBishop then Most Senior Apostle,then the next thing will be to contest with God for His seat! Hahaha. I can confidently tell you that all these positions will only cause divisions,jealousy,hatred and competitions in the church.

Let me share some of the problems this system creates :

1)Unhealthy competition: Pastor A starts keeping malice with Pastor B because they left Seminary same year and now Pastor B is ahead of him.Their church members also line up behind them to start the ‘holy fight’.Please why are we creating problems for ourselves?

2)Loss of focus: Many of these ministers lose focus because of their desire for these positions.Time of prayer is converted to time of lobbying at the headquarters for positions.Time to get filled with fresh anointing is sacrificed for getting earthly promotions.

3)Pride: The title becomes a thing of pride.If people don’t address you by your title, you get angry and leave the function you are billed to attend! You even brag that it is God that has promoted you, when you know it was purely lobbying par excellence!

4)Sources of temptation: Many of the leaders have dipped their hands into evil because their subordinates have tempted them with ‘things’ they cannot resist.Pastor A wants to become a District Superintendent, the next thing he does is to start paying the church leaders at the  headquarters  visits with ‘packages’.It is good to give leaders gifts,but when the motives behind the gifts are to get positions or titles,it is wrong.It is called bribery and corruption!

5)Unnecesary fights,quarrels and resentment: Go and read church history and see how all these caused havocs in the churches that were making waves in Nigeria in the 90s.Many of them ended  up in court to sort out their differences just because they wanted one position or the other.

6)The use of evil powers to get the positions: During the Pastors’ convention of a church some  years ago I heard some pastors were seen with different types of amulet under their suits! They didn’t hide them.They publicly displayed them to intimidate the other innocent Pastors! Hummmm…Just because of Positions! Titles!

7)Manipulation of figures to get position: By the time the leaders tell you to increase the number of your congregation from 200 to 1000 within the next 5months before you can get promotion,the devil will not be far advising you to manipulate your figures,since those leaders won’t be there to verify the figures every Sunday!

Can all these unhealthy rivalries and manipulations stop please? You are what you are in Christ by God’s grace.You have been called by God,be focussed in that ministry of yours.You are not inferior to a Pastor because you are an evangelist.If you are a Teacher that is called to instruct and teach people in the way of the Lord,please do you need to be called a Pastor before you fulfill that role? Or is it because the word ‘Pastor’ is prestigious? Maybe you can start calling yourself ‘Teacher so and so’…Haba!

Divine promotion only comes from God.Let Him that called you to be a Pastor,an Evangelist,a Teacher etc promote you in due time.