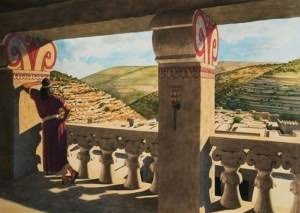 “One evening David got up from his bed and walked around on the roof of the palace. From the roof he saw a woman bathing. The woman was very beautiful…”-2 Sam 11:2

To understand this verse,one needs to know how the roof of ancient Jewish houses looked like:It was simply a flat top with parapet( a barrier/a low protective wall)

Here is an image to depict the roof:

The next image tries to capture how King David must have positioned himself to ‘look’ at the beautiful woman:

King David’s palace was on the height of Mount Zion, and therefore he could see the open courts of the houses in the lower city.His palace put him at a vantage position unlike other houses around.

According to a commentator:”In one instance he saw a beautiful woman bathing. In the courts of the houses, it was common to have a basin of water,and the place was probably entirely concealed from every other point of observation than the roof of the palace,from which no harm was suspected.”

THREE SALIENT POINTS TO LEARN FROM THE VERSE

1)King David’s palace was built on Mount Zion without considering the fact that he could peep from the roof to look at a woman.

Are you in a privileged position today? Are you in any top position that makes others vulnerable to you? Have you decided to take advantage of people because of the position you occupy? Think about these things.

2)No one would have expected the sin of ‘lookery’ from a King that had at least 20 wives as at then!

However,lust does not respect the fact that someone is married or not.Once lust is conceived,caution and commonsense may be far from that person.

3)King David had a good public reputation.He was seen as the best King in Israel.He never lost any battle except this moral battle in which he was defeated.

A hypocrite is worse than a sinner. A sinner does not hide who he/she is but a hypocrite does.A real womaniser will not hide it from others but a hypocritical christian that is seen as a holy person outside may be hiding the fact that he is an adulterer!

Do you know Jesus never chastised any sinner throughout his ministry on earth?In fact Christ was always seen either eating with sinners or residing in their houses etc.He loved the sinners even though he never condoned their sins.He came for the sinners anyway.But He was always at loggerheads with the Pharisees and Sadducees that were hypocrites.They would say A in public,they were doing Z in private.He hated the fact that they were living double lives.

You are in a privileged and vantage position.

You are a city set on a hill.

You are in a sensitive position to ‘see’, ‘look’ down the ‘courts’ therefore, you need to be very careful how you handle this rare privilege.

If you have misused your opportunities in the past,repent of your ways today.