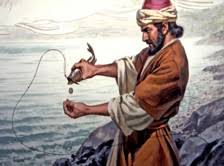 Let me continue the series by saying that Jesus’ ministry was not bankrolled financially by miracle! The source of money used during His ministry on earth was not from the mouth of the fish even though he could command such to happen.Rather,He had people who contributed cash and materials to support Him.

For your information,his ministry was supported by

1)Some influential people and

2)Some Apostles especially those that can fish

His key financial supporters were

Joanna, the wife of Herod’s steward

After this, Jesus traveled about from one town and village to another, proclaiming the good news of the kingdom of God.The Twelve were with him, and also some women who had been cured of evil spirits and diseases: Mary (called Magdalene) from whom seven demons had come out; Joanna the wife of Chuza, the manager of Herod’s household; Susanna; and many others. These women were helping to support them out of their own means-Luke 8:1-3

The Disciples also sourced for funds especially through the sale of the fish to a man called David.They would fish and sell their catches as a means of earning money! Let me post an excerpt from an extra-biblical report about it here:

Throughout this period the apostles would go fishing at least one day a week, selling their catch to David for consumption by the seaside encampment. The funds thus received were turned over to the group treasury. The twelve were permitted to spend one week out of each month with their families or friends. And here’s more about the management of the apostolic funds-Urantia 148:0.2

If you doubt the report above,can you remember what happened to Peter after Jesus was crucified? He went to fish again!

Afterward Jesus appeared again to his disciples, by the Sea of Galilee. It happened this way: Simon Peter, Thomas(also known as Didymus), Nathanael from Cana in Galilee,the sons of Zebedee,and two other disciples were together. “I’m going out to fish,” Simon Peter told them, and they said, “We’ll go with you.” So they went out and got into the boat, but that night they caught nothing-John 21:1-3

Contrary to what many people think,Peter went to fish as usual! It wasn’t that going to fish was wrong.If fishing was not permitted by Jesus,why did he ask Peter to go to the lake and fish in our text? Rather,it was one of the ways Peter and others were supporting the ministry and paying their bills.

I have gone this far to establish something: The financial sources of Christ ministry were not shrouded in secrecy nor were they attributed to miraculous acts! God put it in the mind of people to help His ministry.So,don’t be fooled when someone says his money is being supplied from heaven!That is not absolutely true. God does not print money! What happens is simple: God has been using people to meet your needs in cash and in kind! Is it possible for God to send money to you through His angels? Yes,it is possible! We can’t limit God.But that is not how God wants the earth to operate! Principles rule the earth not miracles!

The saying ‘favour is better than labour’ is true but don’t get it twisted any favour without continuous labour is not sustainable! In fact,favour meets you while you are busy labouring! Manna stopped dropping from heaven on the day the Israelites stepped their feet on the Promised Land.God made them to start applying the principles and laws of agriculture.There was no more free food for them,they started working to make ends meet.

Prophet Elijah experienced ‘Miracle Food’ but eventually the brook dried up and the raven was no longer coming after a while! God had to send him to beg a widow that provided for him afterwards! Miracle money (if there is anything like that) is not sustainable.This is because God did not set the earth in place to operate on the basis of miracle! There is a principle to follow in getting food on the table and usually there is dignity and reward in labour!

The purveyors of Miracle Money have forgotten that even Jesus had to command Peter to go and fish(labour)! If you think it is easy to fish,go to a nearby lake after reading my post and catch one! He asked a professional fisherman to do that job! It is like telling a lecturer that tomorrow morning the first student or person you will meet when going to teach will give you the money you need!

The miracle of the coin in the mouth of the fish is even deeper than all that.Jesus didn’t perform the miracle as a template for you to command money to happen in strange places as a proof you are a man of God.It is not recorded for us to use it to raise money when in need.If we restrict this wonderful miracle to getting money from God when we are broke then we are the most miserable of all men.Satan can do same through magic!

What are the reasons for this miracle? This will be my focus in the third part of this series.

THE COIN IN THE MOUTH OF THE FISH (1)